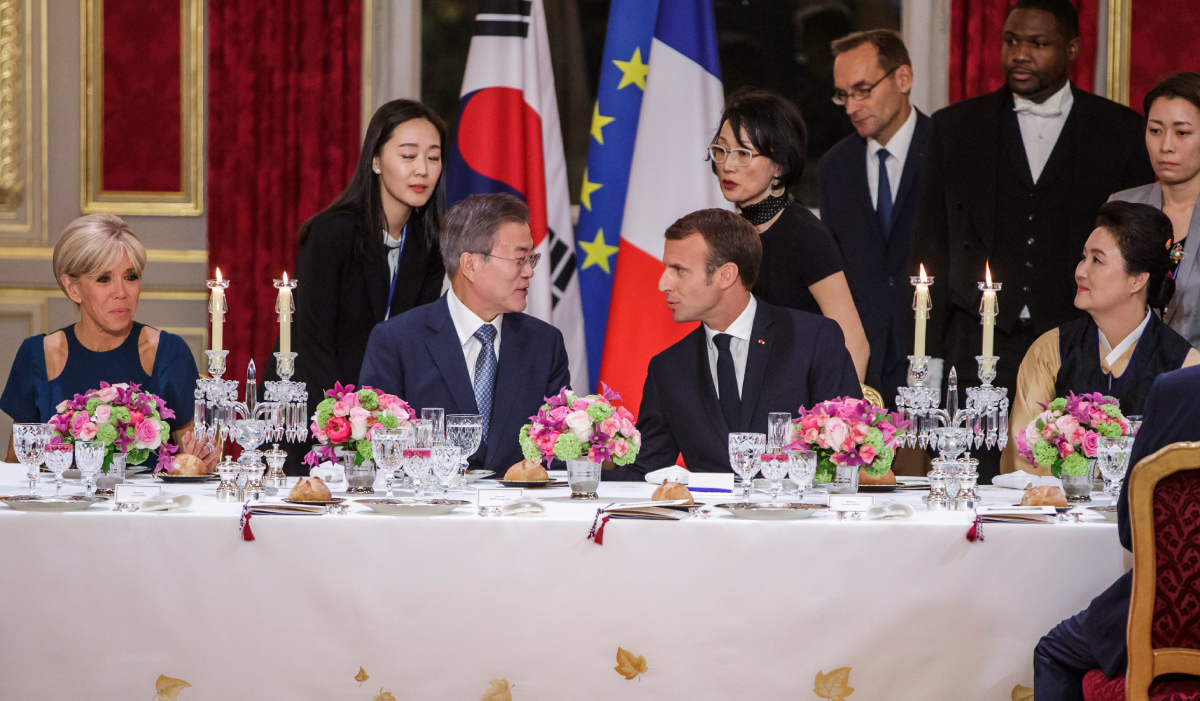 South Korean President Moon Jae-in urged France’s leader to play a role in easing international sanctions on North Korea amid indications of a growing rift between Seoul and Washington on economic pressure on the North.

During a summit on Monday in Paris, Moon asked President Emmanuel Macron of France, one of the five permanent members of the UN Security Council, to play a role in sanctions relief when it can be determined that North Korea has taken steps to irreversibly denuclearize.

This was the first time Moon asked a leader of a country to ease international sanctions on the North, though on a conditional basis, as Seoul has been in line with Washington’s call for complete denuclearization before sanctions relief on Pyongyang.

Moon told Macron that North Korean leader Kim Jong-un said not only would he halt his country’s nuclear and missile testing and dismantle related facilities, but also he is “ready to scrap all of its nuclear weapons and materials should the United States take corresponding measures,” according to the Blue House in a statement.

Then Moon asked Macron “to play a role in the easing of United Nations sanctions when it can be determined that the North Korean denuclearization process is at least at an irreversible stage, to further encourage the North to denuclearize.”

However, during a joint press conference with Moon at the Elysee Palace after their summit, Macron called for maintaining international sanctions until the “complete, verifiable and irreversible denuclearization,” or CVID, of the North.

France is committed to helping North Korea’s denuclearization efforts, said Macron, adding that he “looks forward to the North showing concrete plans toward scrapping its nuclear and missiles program” but that UN sanctions will have to continue to be implemented until then.

Macron said he backs Moon’s efforts toward denuclearization and peace on the Korean Peninsula and further offered France’s expertise as a nuclear power, adding it is ready to play an active role when the denuclearization negotiation process makes headway. France does not have diplomatic relations with North Korea.

The other four veto-wielding members of the Security Council are the United States, China, Russia and Britain, also nuclear states. Russia and China, traditionally backers of the North, have favored a phased rollback of sanctions, but the United States has adhered to its position that complete denuclearization must come first.

Moon stressed during the press conference the importance of the faithful implementation of UN Security Council sanctions. “I believe there has to be a faithful implementation of the UN Security Council sanctions until denuclearization,” he said, “and afterward there has to be international cooperation. South Korea will also be keeping with this framework while working toward improving inter-Korean relations.”

But Moon noted there also “is a need to give North Korea confidence that its security can be guaranteed without a reliance on its nuclear program.”

He continued, “The international community needs to provide assurances to North Korea that it has made the right decision to denuclearize in order to speed along the denuclearization process.” The UN Security Council, and France as a permanent member, he said, can play a role in this process.

In high-level talks Monday, the two Koreas agreed to hold a joint groundbreaking ceremony as early as late November to kick off a project to modernize and link roads and railways connecting the two countries.

The U.S. State Department Monday reiterated its position calling for the full implementation of UN sanctions on North Korea, noting through a statement, “The improvement of relations between North and South Korea cannot advance separately from resolving North Korea’s nuclear program.”

On whether Seoul and Washington are at odds over the inter-Korean railway project, Noh Kyu-duk, spokesman for South Korea’s Foreign Ministry, said in a briefing Tuesday, “Inter-Korean exchange projects, including railway cooperation, are happening in compliance with the principle of adhering to sanctions on the North, and we closely consulted the United States on this and plan to continue to do so.”

Moon also raised his vision of creating an East Asian Railroad Community, which he first proposed last August during remarks at a state dinner hosted by Macron and his wife, Brigitte, Monday evening after their summit. Noting the progress on the Korean Peninsula over the past year, Moon said, “South and North Korea have ended military confrontations and embarked on a journey toward complete denuclearization and permanent peace. A second historic North Korea-U.S. summit is also awaited.”

Moon lauded France for its “tolerance and harmony” and its effort toward unifying a divided Europe at the end of World War II, noting then-French Foreign Minister Robert Schuman’s proposal to establish an economic community together with Germany.

“I hope that a railroad community will succeed in Northeast Asia,” said Moon, “and pave the way for achieving economic cooperation and multilateral security cooperation.”

Moon asked France, which played a leading role in European integration, to support the process so that the “Korean Peninsula will be able to accomplish peace and contribute to the integration and prosperity of Northeast Asia.”

Moon and Macron, who both were inaugurated in May 2017, held their first summit in July in Hamburg on the sidelines of a Group of 20, or G-20, meeting.

The two sides during the summit covered expanding cooperation on global issues such as climate change, foreign affairs, security, defense and economy. Based on a comprehensive partnership for the 21st century established in 2004, they agreed to expand bilateral trade and investment and advance areas of cooperation such as science and technology, new industries, SMEs and start-up sectors to develop new growth engines in the fourth industrial revolution, according to the Blue House.

Moon was scheduled to speak on Tuesday at a Korea-France business leaders’ summit. Later that day, he was set to depart for a three-day trip to Italy, the second leg of a nine-day, four-nation Europe tour which kicked off Saturday. He will visit Rome and the Vatican Thursday, where he will deliver a message from Kim Jong-un inviting Pope Francis to Pyongyang.

As Moon travels through Europe with a message of reconciliation with Pyongyang, Stephen Biegun, the U.S. special representative for North Korea, kicked off a trip to Moscow Monday, and will later head to Paris and Brussels, according to the U.S. State Department, to work toward the “final, fully verified denuclearization of North Korea.”

A South Korean Foreign Ministry official said Tuesday on any rifts over the inter-Korean railway project: “In order to prevent unnecessary controversy in regard to sanctions in the process of carrying out inter-Korean exchange projects, we will conduct them within the framework of the sanctions on the North. We have had many levels of consultations with the United States.”