Heroes to face Eagles after Tigers crash out

Heroes to face Eagles after Tigers crash out 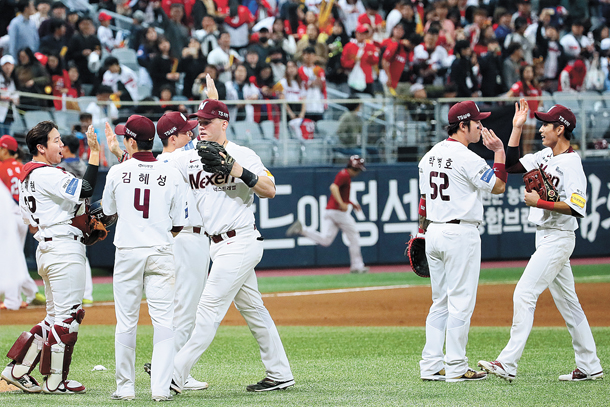 The Nexen Heroes celebrate their 10-6 victory against the Kia Tigers in the wildcard game at Gocheok Sky Dome in Seoul on Tuesday. [YONHAP]

After years of toiling near the bottom of the standings in Korean baseball, the Hanwha Eagles will finally get their taste of the postseason this week.

The Eagles will host the Nexen Heroes in Game 1 of the best-of-five first-round series in the Korea Baseball Organization (KBO) tomorrow. The first pitch at Hanwha Life Eagles Park in Daejeon, 160 kilometers (99 miles) south of Seoul, is at 6:30 p.m.

The Eagles got the bye to this stage in the postseason. The Heroes knocked off the defending champion Kia Tigers 10-6 in the wild-card game Tuesday.

This is the first postseason meeting between these two clubs. The Eagles last reached the postseason in 2007, and the Heroes joined the KBO in 2008.

Though the Eagles have been on the outside looking in for more than a decade, they’re a veteran team with a handful of players with Korean Series championship rings, with those key players having arrived via free agency or trades.

The Heroes are in their fifth postseason over the past six years, but 15 of the 30 players on the wild-card roster made their postseason debuts Tuesday.

The Eagles and the Heroes split their regular season series at 8-8. They’re clubs with obvious strengths and weaknesses.

The Eagles led the KBO in bullpen ERA with 4.28. With a stout back end of the pitching staff, the Eagles posted the best winning percentage in one-run games at 20-13 and were 50-5 in games in which they held a lead through five innings. They also had the fewest blown saves with 13.

On the flip side, the Eagles had the second-fewest victories by their starters with 35. Their starters ranked fifth with a 5.46 ERA for the season and dead last in the final 30 games with a 6.73 ERA.

Manager Han Yong-duk will once again have to ride his bullpen horses, including closer Jung Woo-ram and setup men Son Eun-beom and Lee Tae-yang.

After two import hurlers, Keyvius Sampson and David Hale, get the nods for the first two games, just who will take the mound in Game 3, a potential series clincher, remains up in the air.

The Heroes have a solid starting rotation but a shaky bullpen that blew a league-worst 23 saves.

They can go to American right-hander Eric Hacker for Game 1 and then side-armer Han Hyun-hee for Game 2. Jake Brigham, who started Tuesday’s wild-card game, will likely be the man for Game 3 on five days’ rest.

On the offense, the Heroes scored nearly 100 more runs than the Eagles in the regular season, while they were neck-and-neck in home runs (165-151 for Nexen).

First-year outfielder Jared Hoying led the Eagles offense, and he destroyed Nexen by pitching to the tune of a .426 batting average, three home runs and eight RBIs.

Infielder Ha Ju-suk batted .254 for the season but .411 against the Heroes. Three of his nine regular season homers came against Nexen.