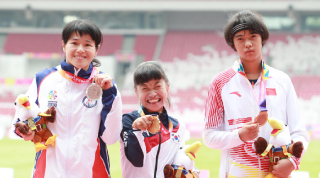 Jeon Min-jae, center, smiles after winning a gold medal in the 200-meter race at the 2018 Asian Para Games in Indonesia on October 10. [YONHAP]

Other athletes around her were a head taller. She approached the starting line for the 100-meter sprint and got ready. Instead of spreading her fingers, she placed her fists on the ground. When the start was called, her legs sprang. She finished first, with the runner-up nearly 10-meters behind her. Jeon Min-jae had won the gold medal at the 2018 Asian Para Games in Indonesia.

Jeon is a para sports star. She has won 13 medals in international events, including five golds. When she was young, she was afraid to face the world. She had contracted encephalitis when she was five and stayed in her room for more than 10 years.

When she was 19, she found the courage to enter a specialized school, and her physical education teacher discovered she excelled at track. Jeon was 26 at the time. The 146-centimeter-tall (4 feet 9 inches) runner won silver medals at the 2012 London Paralympic Games. She was so afraid of the world that she once wished to live only until she turned 20, but she stood at the podium and smiled at the world. She earned a nickname, the “smiling angel.”

The para sports stars like Jeon are not only breaking out of their shells. They are also encouraging other disabled people who stay indoors because of physical challenges or avoid other people. Many people with physical disabilities and mobility challenges suffering from obesity and chronic conditions are motivated by these athletes to take care of their health. We need more paralympic sports stars.

It is not easy for para-athletes to become sports stars in Korea. Cho Won-sang became Korea’s first para-medalist in swimming when he won a bronze medal in the 200-meter freestyle at the London Paralympics. He is a member of the Suwon Municipal Para-athletes Team. But the team only has two members — Cho and a judo player — and Cho doesn’t have the corporate sponsorship that an Olympic medalist would expect. His mother said they are grateful for Suwon City’s support.

It is even harder for those with disabilities who are not athletes to use sports facilities to keep themselves healthy. Many of the facilities don’t have accessible showers. Coaches specializing in sports for the disabled are rare, and they are paid about minimum wage. Prejudice is also an issue. Disabled people are sometimes asked to use facilities when they are not crowded. Discrimination against disabled people should be eradicated. How many para-sports medals do we need to change the perception?