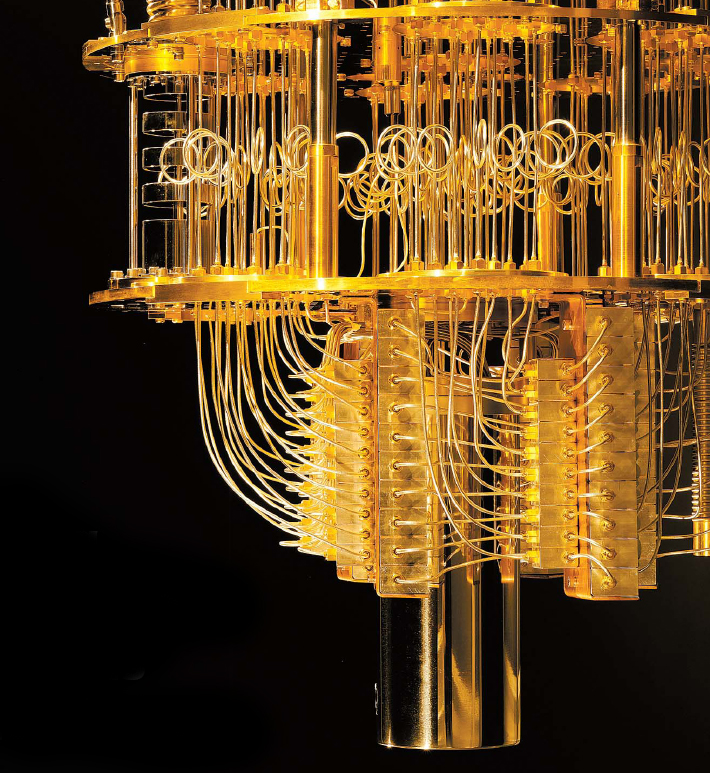 The Ministry of Science and ICT will be injecting 3.2 billion won ($2.8 million) into the research lab over the next four years, with the aim of developing the quantum algorithms and software source technology of quantum computing.

Simply put, the idea of quantum computing is to find a way to pass the barriers that limit the speed of data transfer by tackling the issue on a subatomic level. The resultant computer would theoretically be millions of times faster and more powerful than the best technology around today.

Other Korean universities, including Seoul National University and Korea University, and private companies such as KT, HomoMimicus and Actusnetworks will participate in the R&D center.

“Quantum computing is a technology that is necessary in realizing the fourth industrial revolution,” said Rhee June-koo, an electrical engineering professor at Kaist who will head the new research lab. “Everyone agrees that the quantum computer will undoubtedly become a core technology of growth that would overcome limits in completing the fourth industrial revolution. As such, in order to raise quantum computing science to the level of engineering, we have to invest relentlessly in basic research.”

A fierce race is underway globally in quantum computer development. The exponential growth in a quantum computer’s processing power will allow it to solve complicated problems that can’t be tackled using today’s binary computers.

Quantum computers are expected to be able to analyze huge quantities of data and instantly revolutionize fields from artificial intelligence to pharmaceutical, finance and even transportation. It will be able to simulate and optimize transportation and climate modeling.

Currently, huge U.S. companies such as IBM, Google and Intel are leading in development, and start-ups like Rigetti Computing, D-Wave Systems and Zapata Computing are also considered forerunners.

IBM unveiled a 50-qubit quantum processor in November last year - a qubit is a basic unit of quantum information - but was quickly surpassed by Google’s 72-qubit processor, dubbed Bristlecone, in March this year. Intel has developed a 49-qubit processor.

As quantum computers are not restricted to a binary system - they are able to access both the 0s and the 1s that limit conventional computers at the same time - 50 qubits offer almost limitlessly more processing power than a regular computer.

Samsung Electronics is one of the IBM Q Network Partners, which also includes JPMorgan Chase, Daimler AG and JSR Corporation. The partners have direct access to 20-qubit IBM Q systems that explore potential applications of quantum computing in their respective industries.

The United States has been aggressively funding development after the U.S. House of Representatives in September passed the $1.27 billion National Quantum Initiative.

The U.S. government later that month announced its quantum information science projects, including the Department of Energy receiving $218 million of funding for 85 projects and the National Science Foundation getting $31 million for multidisciplinary quantum research.

The Korean government in August announced that it will be investing roughly 1 trillion won by 2019 to create 100 big data centers, which is expected to grow 39 percent from $150.8 billion in 2017 to $210 billion in 2020. Big data is expected to be one of the areas benefiting from the development of quantum computing.

Currently, quantum computers are prototypes that are large and clunky, resembling computers in the ’40s and ’50s, and fail to match the performance of existing supercomputers.

One of the key engineering problems is keeping the superconducting qubit in an environment free from dust or contamination. It needs to be kept under extreme refrigerated temperatures of below minus 273 degrees Celsius (minus 459.4 degrees Fahrenheit) in order to allow electrons to flow without any electrical resistance to keep a quantum state. The quantum state is so fragile that it could easily collapse, and as a result, the time that the qubits remain in a quantum state is short.

But once it becomes practical, the application is expected to be exponential.

The Boston Consulting Group, in a report titled “The Coming Quantum Leap in Computing,” released in May this year, forecast that the quantum computer market will growth to a $2 billion market by 2035 and expand to $260 billion by 2050.

“Pharmaceutical and chemical companies are already experimenting with the potential of quantum simulation to accelerate drug discovery and design molecules with fewer unintended side effects,” the report said. “Executives in these industries estimate that identifying new targets in this way could increase the rate of drug discovery by 5 percent to 10 percent and accelerate development times by 15 percent to 20 percent. They also believe that better molecule design could increase drug approval rates.”

Scott Crowder, vice president and chief technology officer of quantum computing at IBM, thinks the technology will be here soon.

“IBM believes that in about five years or so, the effects of quantum computing may begin to be used across new categories of professionals and developers looking to this emerging method of computing to solve problems once considered unsolvable,” Crowder said. “The industry will have discovered the first applications where quantum computers used alongside classical computers will offer a benefit to solving specific problems.”

Compared to other advanced economies, Korea is believed to be behind by around seven years in quantum computing. “However, there’s still a chance [to catch up] since there’s not much of a gap software-wise,” Kaist Prof. Rhee said.

Instead of trying to compete in building their own quantum computer, Korean companies are focusing on data security.

SK Telecom in 2011 created a quantum technology research lab and has been working on quantum cryptography, also known as quantum key distribution.

Simply put, current security systems are based on mathematical problems, which are vulnerable to hacking and decryption. On the other hand, quantum key distribution protects data by employing quantum mechanics.

In 2017, SK Telecom created the prototype for the world’s smallest five-by-five millimeter quantum random number generator (QRNG) chip that can create random numbers with the absence of any pattern. SK Telecom said it has been focused on developing quantum cryptography technologies to guarantee secure data transmission that can be applied to artificial intelligence, Internet of Things (IoT) and autonomous driving.

SK Telecom has been ramping up its expansion in the field, including securing a majority stake of world No. 1 quantum encryption developer ID Quantique based in Switzerland in February and clenching a 10 billion won-supply contract with the U.S. Quantum Xchange in June.

In July, the Korean telecommunications company tested its quantum-safe system - consisting of quantum key distribution, QRNG and an operating system - on its German partner Deutsche Telekom’s trial network. The quantum cryptography system will be applied to Deutsche Telekom’s commercial network in 2019.

Rival companies KT and LG U+ have been speeding up their quantum cryptographic telecommunication systems. KT has been working with Korean research institutes, including the Korea Institute of Science and Technology (KIST), Electronics and Telecommunications Research Institute and Kaist since the beginning of the year, including testing a one-to-four quantum encrypted communication sent through KT’s commercial network over a distance of 10 kilometers (6.2 miles) in February. The company said it was the world’s first test of its kind.

In June, KT opened the Quantum Communication Application Research Center with KIST, with the goal of commercializing quantum communications technology.

LG U+, the smallest telecommunication company in Korea, in June tested its quantum cryptography communication system with Spain’s Telefonica.

According to Research and Market, the global quantum cryptography market was estimated at around $328 million in 2017, but will grow over 25 percent to surpass $12 billion by 2023.

“With the growing IoT market, which encompasses IoT, smart grids, smart cities, smart consumer wearables, smart appliances and smartphones, the need to secure data is also increasing, thereby paving the way for quantum cryptography,” the report said. “Further, rising concerns for data security due to a rapid surge in the number of cyberattacks over the past few years is expected to continue boosting the quantum cryptography market across the globe in the coming years.”