Holiday films fail to break even: Experts say audiences found options to be unoriginal and flat

Holiday films fail to break even: Experts say audiences found options to be unoriginal and flat 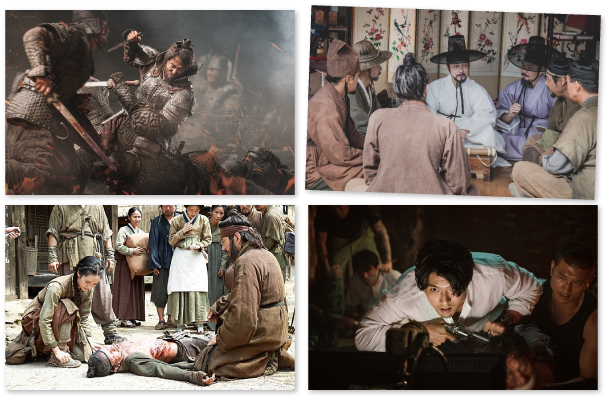 Clockwise from top left are scenes from “The Great Battle,” “Fengshui,” “The Negotiation” and “Monstrum,” all of which are big-budget features released in time for the Chuseok holiday last month. [NEW, CJ ENTERTAINMENT, LOTTE ENTERTAINMENT, MEGABOX PLUS M]

During the Chuseok holiday season last month, audiences were offered rife choices in cinema. Hoping to produce a box office smash, distributors enthusiastically pushed big-budget releases starring high profile actors. Four weeks after their arrival, however, there seems to be no obvious winner.

Hoping to attract large crowds during one of the most popular movie-going seasons of the year, “The Great Battle,” “Fengshui,” “The Negotiation” and “Monstrum” arrived in theaters just in time to fight it out over the holiday.

Despite high expectations, none of the four films managed to reach their break-even-points by this Monday despite the fact that the total number of tickets sold last month rose by more than 30 percent on-year, backed by the holiday season.

According to the Korean Film Council on Tuesday, more than 3.5 million tickets were sold over the three-day Chuseok holiday - the most since 2008.

Of the four Chuseok releases, “The Great Battle,” which tells the story of the fierce battle between Goguryeo (37 B.C. - A.D. 668) General Yang Man-chun (Zo In-sung) of Ansi Fortress and his troops and a large army from the Tang Dynasty, has performed the best.

The movie, which cost more than 20 billion won ($18 million) to make, has so far sold a total of 5.35 million tickets since its arrival in theaters on Sept. 19. The film’s break-even-point is 5.8 million ticket sales.

Also released on the same day were “The Negotiation,” which revolves around an intense psychological confrontation between an illegal arms dealer (Hyunbin) and a professional negotiator of the Seoul Metropolitan Police Agency (Son Ye-jin), and “Fengshui,” which tells the story of the futility of human greed through the depiction of people who fight over the perfect spot to bury their ancestors. “Fengshui” stars Cho Seung-woo and Ji Sung.

The outcome of “Monstrum,” starring Kim Myeong-min and Hyeri from Girls’ Day, was devastating.

Released a week ahead of its three competitors, the historical fantasy feature, about a group of people fighting against a mysterious creature endangering the monarch, has sold just 720,000 tickets - not nearly enough to make up for its 10 billion won price tag.

“Releasing four big-budget movies during the Chuseok season resulted in reckless competition,” said film critic Hwang Jin-mi. “There still seems to exist a common perception that the Chuseok holiday is the most lucrative season to release movies because big families are expected to spend time at the cinema over the long holiday. But people’s lifestyles have changed. Not as many people spend their holiday with their family anymore.”

Hwang also pointed to a lack of creativity from movie production studios.

She added, “The essence of these films are pretty much the same as the ones audiences have already seen so many times before, except with different A-list actors.”

Instead of spending large amounts of money on seasonal movies, it is crucial to distribute the spending on smaller movies throughout the year, according to movie critic Kim Heon-sik.

“Films [released during the Chuseok holiday] imitated elements commonly used in successful movies, which mostly relate to the use of CGI. This ultimately raises production costs,” said Kim.

Kim referred to “Dark Figure of Crime,” which topped last weekend’s box office, as an example of a film that is performing well thanks to its timely release. “These types of crime movies do not usually top the box office. However, many people are choosing to watch the movie because there aren’t enough choices in theaters right now.”