Harris warns Seoul on too much engagement

Harris warns Seoul on too much engagement 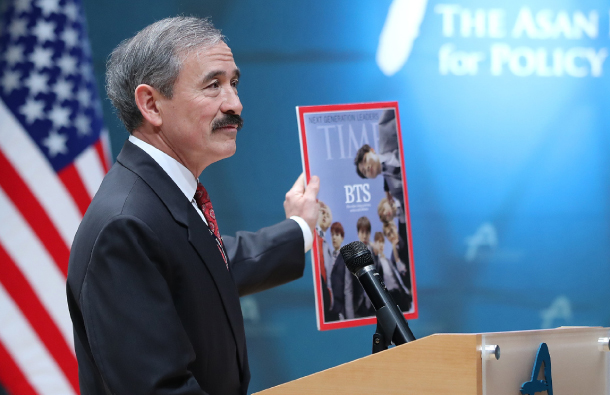 U.S. Ambassador to Seoul Harry Harris said Wednesday that inter-Korean dialogue “must be linked” with Pyongyang’s denuclearization and South Korea should stay “synchronized” with the United States.

The remarks, made during a meeting of security experts in Seoul co-hosted by the Asan Institute for Policy Studies and the Woodrow Wilson Center, came amid reports that the Donald Trump White House was irritated by Seoul’s rapid pace of engagement with the Kim Jong-un leadership and its efforts to try to ease sanctions on his regime.

On Monday, the two Koreas agreed in a high-level meeting to hold a joint ceremony some time between late November and early December to mark the start of work to modernize and link roads and railways connecting the two countries along the seas.

“I believe that if the United States and South Korea continue to approach North Korea with a common voice,” said Harris, “we can turn the commitments that were made in Pyongyang, in Panmunjom and in Singapore into reality.”

The envoy continued that the U.S. was “cognizant” of the priority that South Korean President Moon Jae-in and his administration have placed on improving South-North relations, but stressed that Seoul had to be on the same page as Washington.

“Only in this way,” he said, “will the prospects of achieving our common goals with the North be the greatest. Of course in the backdrop of all this is the enduring strength of our alliance.”

U.S. Secretary of Defense Jim Mattis, in a different meeting with reporters on a plane en route to Vietnam on Monday, said sanctions patrols to enforce unanimous United Nations Security Council resolutions on North Korea, specifically on ship-to-ship transfers, were being maintained.

“On a steady basis we have a number of countries helping on that,” said Mattis. “I think it’s up to five countries right now, I may be wrong, but it’s around that number. And the information-sharing among those countries is going well.”

Without going into detail, Mattis noted there was “progress” in denuclearization talks between Pyongyang and Washington but that the U.S. was aware it’s a difficult issue to solve.

In terms of the military alliance between South Korea and the U.S., Mattis said combined exercises were suspended but that training was still going on, as well as other collaborations between the countries’ armed forces.

The defense chief brushed off reports that he may resign.