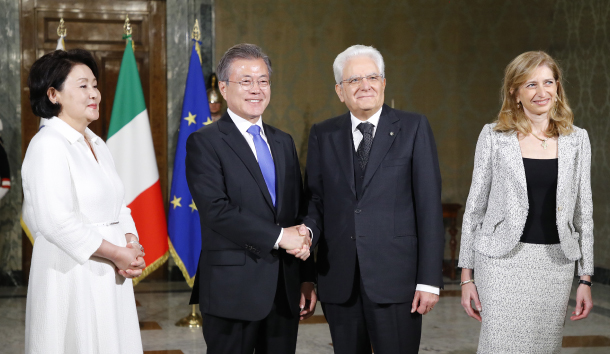 President Moon Jae-in landed in Rome Tuesday night on the second leg of a four-nation tour in Europe, continuing his mission to gain support for his engagement policy with North Korea.

The highlight of his Italian stop falls on Thursday when Moon meets Pope Francis to extend an invitation from North Korean leader Kim Jong-un to visit Pyongyang.

Greg Burke, director of the Vatican Press Office, said the pontiff will receive Moon, a Roman Catholic, at noon.

Nam Gwan-pyo, second deputy director of the Blue House’s National Security Office, said last week that the two planned to discuss peace-related issues on the Korean Peninsula and “specific ways” to achieve reconciliation and prosperity in the region.

In a contributed column that was published Tuesday in L’Osservatore Romano, the Vatican newspaper, Moon said he always kept in mind Pope Francis’s emphasis on “the diplomacy of dialogue” while trying to open a new era of peace and prosperity with North Korea. And as a result, he pointed out, he and Kim signed the historic Pyongyang Declaration last month in their third summit, through which the two countries agreed to end military confrontation.

The United States and North Korea have also ended 70 years of confrontation and sat face-to-face to talk with each other, the Blue House chief wrote, apparently referring to Kim’s first summit with President Donald Trump on June 12 in Singapore.

During an interview last Sunday with Le Figaro, a French daily newspaper, Moon said he hopes Pope Francis helps North Korea “continue to walk the path of peace” and ensure the country that its decision to denuclearize is the right decision.

Before his meeting with the pope, Moon was expected to have lunch with Italian President Sergio Mattarella on Wednesday afternoon and then hold a summit with Italian Prime Minister Giuseppe Conte. The Blue House said the two sides were expected to discuss overall bilateral ties and ways to cooperate in the age of the fourth industrial revolution. Moon, who was elected in May 2017, has never held a summit with an Italian leader before.

On Wednesday evening, Moon was scheduled to attend a special mass for peace on the Korean Peninsula presided over by Cardinal Pietro Parolin, secretary of state in the Vatican. The Vatican allowed the mass to be aired live in Korea.

The mass was planned to begin at around 1 a.m. Thursday Seoul time, with Moon giving a speech on the South Korean government’s efforts to establish peace on the peninsula afterwards.

On Friday, Moon is scheduled to leave for Belgium to attend the 12th Asia-Europe Meeting (ASEM) summit in Brussels, where he will hold bilateral summits with the United Kingdom and Germany. Moon will then travel to Denmark and return home this Sunday.