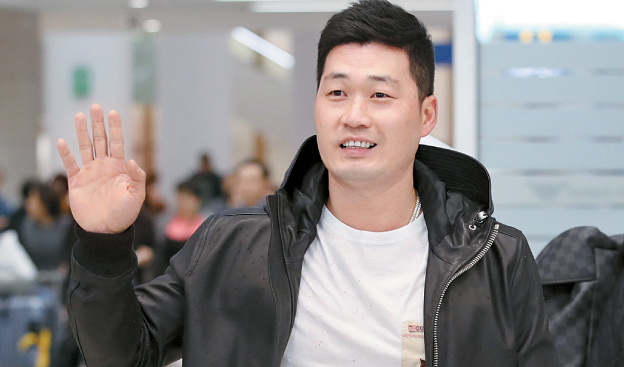 Oh arrived back in Korea Wednesday after his third major league season, split with the Toronto Blue Jays and the Rockies. He signed with the Jays in February and was dealt to the Rockies in July. He made his first big league postseason appearance with the Rockies, who won the National League (NL) wild card game over the Chicago Cubs before losing to the Milwaukee Brewers in the NL Division Series earlier this month.

The former Korea Baseball Organization (KBO) All-Star pitched the two previous seasons with the St. Louis Cardinals and was with the Hanshin Tigers in Japan in 2014 and 2015. Speaking to reporters at Incheon International Airport, the 36-year-old said he felt it was time to come home.

“I am a bit exhausted after spending five seasons in Japan and the United States,” Oh said. “I feel like I want to return to the KBO while I still have the energy to help the team and pitch in front of home fans. I can’t make this decision alone. I’ll have to speak with my agency about the next season.”

The right-hander went 6-3 with three saves and a 2.63 ERA in 73 appearances for the Jays and the Rockies. He had a vesting club option worth $2.5 million for next season, which kicked in after he surpassed 70 appearances in 2018.

This means Oh can stay in Denver if he wants to. But if he insists on returning to the KBO, the Rockies would have to terminate his contract and release him outright.

Oh said his fatigue comes from dealing with life away from the ballpark.

“It’s not easy living in a foreign country. You have to face the opposing hitters on the mound, and there are a lot of other things you have to battle off the field,” Oh said. “Everything away from the stadium is an extension of competition.”

Oh bounced back in 2018 after posting a 4.10 ERA in 62 games for the Cardinals. Despite his apparent homesickness, Oh said he feels physically fine.

He bristled at the notion that he was throwing more breaking balls because he’d lost the zip on his patented, hard fastball.

“We all learn how to throw breaking balls so we can use them in games,” he said. “I am not worried about my fastball command or velocity. I have no physical issues. I appeared in more than 70 games this year.”

Oh spent his entire nine-year KBO career with the Samsung Lions, and he remains the league’s career leader in saves with 277.
The Lions still reserve rights to Oh. If he wants to return to the KBO, he will have to sign with his old club. He can only join another team if the Lions agree to relinquish their rights and make Oh a free agent.

Even if he comes back to the domestic league, Oh won’t be able to play right away. In 2016, the league handed down a half-season suspension on Oh to take effect if he ever plays here again, after he was fined by a court on illegal overseas gambling charges.
If the KBO sticks to the current 144-game schedule next year, Oh will not be eligible for 72 games.

A Lions official said he had only found out about Oh’s intentions through Wednesday’s media reports.

“We haven’t even had discussions on this,” the official said. “But obviously, if he wants to, we can meet with him and explore different possibilities.”