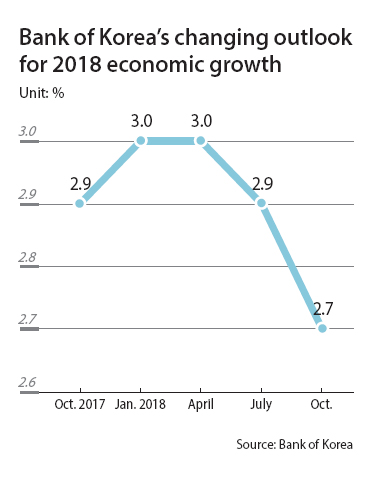 The Bank of Korea (BOK) slashed this year’s economic outlook to 2.7 percent on Thursday amid worse-than-expected earnings, a sluggish job market and weak investment after a widely-expected freeze of its key interest rate.

The central bank kept its benchmark rate at 1.5 percent for the 11th consecutive month, despite two dissenters on the monetary policy committee - Lee Il-houng and Koh Seung-beom - who recommended a rate hike. Gov. Lee Ju-yeol cited internal and external headwinds for the economy, but at the same time, signaled a possible rate rise in the future.

“We factored in the weaker-than-expected earnings in the second quarter,” Lee said, “Still, the figure is largely in line with a potential growth rate [of 2.8-2.9 percent].”

The lowering of the growth forecast from 2.9 percent reflected the impact of a trade dispute between the world’s two largest economies and growing financial turbulence stemming from fears surrounding rising interest rates in the United States, Lee said.

The revision follows a series of moves by the International Monetary Fund (IMF) and the Organization for Economic Cooperation and Development (OECD) to lower the country’s growth rate estimate for this year. The IMF projects Korea’s growth will reach 2.8 percent while the OECD was less optimistic at 2.7 percent.

The governor reaffirmed the need to ease financial imbalances that resulted from a prolonged period of low rates, hinting at a possible rate hike.

“[The BOK] has made it clear that there is a growing need to address financial imbalances,” Lee said, “And the time to focus on that has drawn near.”

There was a notable change in the wording of the BOK’s statement. It no longer used the word “carefully” to describe its adjustment of the accommodative monetary policy.

Still, analysts hold varying views as to when exactly the BOK will act, with many predicting next month.

“We expect the Bank of Korea to push up the rate in November as the governor reaffirmed his commitment to raising the rate, and there were two dissenters,” said Paik Yoon-min, a researcher at Kyobo Securities. The rise should come when instability on global financial markets subsides, he said.

Others believe the BOK will find it hard to raise the rate, given weak economic indicators.

“If we look at different economic indicators, there is no viable justification to push for a hike, besides calls from politicians,” said Kim Ji-na, a fixed income analyst at IBK Investment & Securities. “The jobs data deteriorated and the BOK has acknowledged that the country face different challenges.”

Top government officials, including Prime Minister Lee Nak-yon and Land Minister Kim Hyun-mee, implicitly advocated a rate hike in the past few weeks, as low interest rates are considered one of the causes of an overheated real estate market. It encourages people to borrow to buy real estates.

The BOK has also been facing pressure from the continuing interest rate hikes by the U.S. Federal Reserve, which may lead to an exodus of foreign investors from Korea. Foreign investors net sold 2 trillion won ($1.7 billion) worth of Korean shares this month alone.