K-pop finds fertile ground to innovate in Latin America: Korean artists are making music to appeal to the Spanish-speaking world

K-pop finds fertile ground to innovate in Latin America: Korean artists are making music to appeal to the Spanish-speaking world 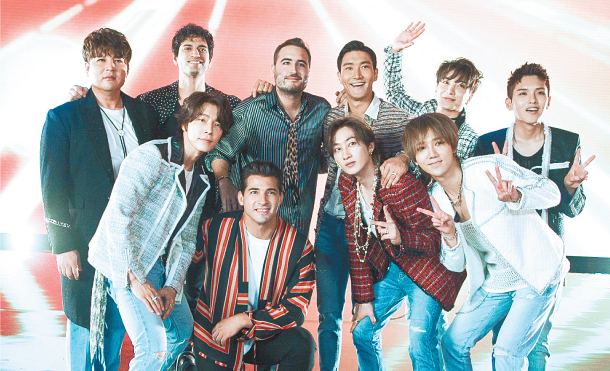 Boy band Super Junior and Mexican band Reik collaborated on the song “One More Time (Otra Vez),” which features both Korean and Spanish lyrics, on their recent album “One More Time.” [LABEL SJ]

Over the past two decades, K-pop has quickly spread from Korea to the rest of Asia, the United States, Europe and the Middle East. After successfully making inroads in those markets, the K-pop industry has shifted its focus to Latin America. With large tours that span the entire region, cross-cultural collaborations with local artists and an upswing in K-pop songs featuring Latin music influences, Korean artists have fully embraced the enthusiasm fans on the other side of the globe have for them.

K-pop became a major phenomenon throughout Latin America in the early 2010s. In 2011, boy band Mblaq visited Brazil to judge a K-pop cover dance festival and in 2012, boy band JYJ embarked on a South American tour with stops in Chile and Peru.

In 2013, SM Entertainment sent Super Junior to Brazil, Argentina, Chile and Peru for their “Super Show 5” tour and fans from all over the continent filled the stadiums and sang along. In Peru, the final destination on the tour, more than 10,000 fans gathered at the Jockey Club del Peru, and another three thousand fans were outside of the arena to cheer for the group, according to Yonhap News.

When BTS first visited South America in 2014 - long before they were the chart-topping global sensation they are now - the group was surprised when a fan meeting in Sao Paulo, Brazil, was filled to capacity. 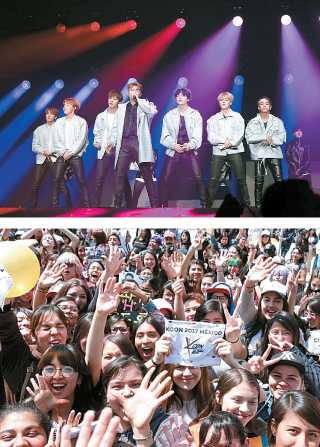 A few years later, during the 2017 Wings Tour, all 12,500 tickets for the group’s show in Santiago, Chile, sold out in a record-breaking two hours, according to the New York Times.

“I [became] a huge fan of BTS [when] my friend introduced them [to me] in 2013,” said 20-year-old Camila Figueredo from Uruguay. “I loved their dance and their hip-hop songs. BTS is now among the most popular K-pop acts in Latin America. Sometimes, I hear their songs on the local radio - very rare considering the fact that they don’t usually play foreign songs,” she added.

Last year was a turning point in the K-pop industry. A number of artists released collaborations with Spanish-speaking performers to create Latin-infused K-pop songs. After debuting with “Hola Hola,” a reggaeton-inspired dance track, co-ed pop group KARD hit the road for a South American tour in 2017, making stops in Mexico, Colombia, Chile, Argentina and Brazil.

The release of “Lo Siento” by Super Junior in April was an ambitious project by the group. The song was written by American singer-songwriter Leslie Grace and production duo Play-N-Skillz.

“As you know, K-pop and Latin pop are well-loved around the world, so we got the idea [to collaborate] after thinking about how to please our fans around the world,” said group leader Lee Teuk in an interview with Billboard in April.

The song - featuring Spanish, Korean and English lyrics - was an immediate success; it became the first K-pop track to land on Billboard’s Latin Digital Song Sales chart, at No. 13. The group’s “Super Show 7” tour, which made stops in Argentina, Peru, Chile and Mexico in April, led to appearances in magazines and on talk shows throughout Latin America, further proving their success. CNN Chile described Super Junior as “the biggest success in the K-pop industry.”

“The songs are amazing - I love both K-pop and Latin pop and Super Junior’s recent songs are great,” said Analaura Burgos, who attended the “Super Show 7” concert in Argentina. “I love how these artists are trying out different subgenres within K-pop. You will always find a group that suits your music taste.”

Super Junior’s project is not new though; other K-pop acts have worked with Latin artists in the past. Girl group Crayon Pop collaborated with Mexican boy band CD9 in 2016 on the song “Get Dumb,” which had two versions - one in English and the other in Korean and Spanish. Though it did not grab as much attention as Super Junior’s song, the music video had more than 300,000 views in four days after its release.

“K-pop has been popular ever since the early 2000s. But at that time, it had only attracted niche fans. The turning point was in 2011, when SM Entertainment held a concert in Paris for the first time, and Latin American fans started to become more active, holding K-pop flash mobs and cover dance contests and performances,” says MBC producer Jung Kilhwa, who worked as a correspondent in Latin America for the network from 2011 to 2013.

“It’s like a halo effect. Recently, BTS performed in London and proved how widespread K-pop has become. They are a highly recognized sensation in the United States and Europe, which means that they are also recognized in other parts of the world as well,” the producer added.