Chez Reavie, left, of the United States and Kim Si-woo, right, watch their tee shots during the first round of THE CJ CUP @ NINE BRIDGES at the Club at Nine Bridges in Seogwipo, Jeju Island, on Thursday. [JNA GOLF, YONHAP]

JEJU ISLAND — The first round of The CJ CUP @ NINE BRIDGES tested players’ ability to play under the strong Jeju winds at the Club at Nine Bridges on Thursday.

With strong winds exceeding 10 meters (32 feet) per second, Chez Reavie of the United States slugged his way to first place, taking a one shot lead with a round of four under par, 68, in the first round.

Reavie, who started on the 10th hole, shot one under par in the first nine holes. In his second half of the round, Reavie slowly climbed up the leaderboard by adding three more birdies.

“It was a great day,” Reavie said. “I hit the ball really well. The wind was blowing really hard all day long so you had to really strike the ball well and keep it out of the wind. Luckily, I was able to do that.”

Despite the strong winds, Reavie didn’t miss a single fairway and only missed three greens throughout the round. 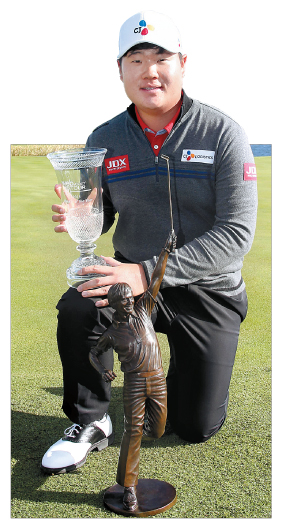 Im Sung-jae poses with the Web.com Tour Rookie of the Year and Player of the Year awards at the Club at Nine Bridges in Seogwipo, Jeju Island, on Thursday. [JNA GOLF]

“Once you get above the hole, this wind is really hard to keep it close so the more greens you can hit, the better,” Reavie said. “That was the key to my game. I hit most of the greens and even if I miss the green I was on the fringe or chipping uphill.”

Kim Si-woo shot a round of three under par to start the tournament at tied for second. Despite a double-bogey only on his second hole of the day, the par-3 second, Kim quickly picked up his pace by making three more birdies to finish his first nine at one under par.

Then, with another three birdies and a bogey in the second half of his round, Kim shot three under par, 69, to get himself one shot behind the leader.

“Since the first hole, I thought it was going to be a tough round today,” Kim said. “I failed to read the wind and started with a double. So I thought it’ll be a difficult round, but I tried to keep it up until the end rather than giving up. And this worked really well. I started to get more confidence in the second half and it allowed me to play a stable round despite the wind.”

The 2016 Masters champion Danny Willett of England is tied for second along with Kim.

Defending champion Justin Thomas didn’t get off to a strong start, shooting one over par, tied for 33rd.

Three-time major champion Brooks Koepka, who played in a group along with Thomas and rookie Im Sung-jae, is tied for 11th at one under par.

Im, the top rookie contender on the PGA Tour, also shot one over par, 73, tied for 33rd.

“I had a tough play due to strong winds since the start of the round,” Im said. “I struggled with my mental game a little bit from continuously putting misses at the beginning of the round. I struggled, but I’m satisfied because I had a strong finish.”

“His performance on Web.com Tour this year, I think is all the more impressive, given the overall strength of what the Web.com Tour is all about and have Sung-jae as a great representative of that level of play,” said Ty Votaw, executive vice president and chief global communications officer for the PGA Tour.

“Web.com Tour alums have won 23 major championships and eight Players Championships. Given Sung-jae’s performance, I have no doubt that we’ll be talking about his performance on PGA Tour on similar terms in the years to come.”

Im had an impressive season on the Web.com Tour, where he picked up two tournaments — the season opener and the finale — and successfully topped the Web.com Tour’s money list for a record 27 straight weeks to become the first wire-to-wire winner.

Im’s victory at the season opener allowed him to become the second youngest player to win on the Web.com Tour. This season, Im got to a great start by finishing tied for fourth at his PGA Tour debut event, the Safeway Open.

“I wasn’t expecting to get such good results at the Web.com Tour, but I’m very happy and thankful to receive the awards,” Im said. “Playing well in my first tournament at the Safeway Open gave me confidence. My goal this year is to play at the TOUR Championship [season finale] and if possible, I want to win a tournament.”

The second round of the tournament will start at 7:45 a.m. at Nine Bridges in Jeju today.

THE CJ CUP @ NINE BRIDGES is the only PGA Tour event in Korea. All 78 participants will play through the weekend with a total prize money pot of $9.5 million and 500 FedEx Cup points.