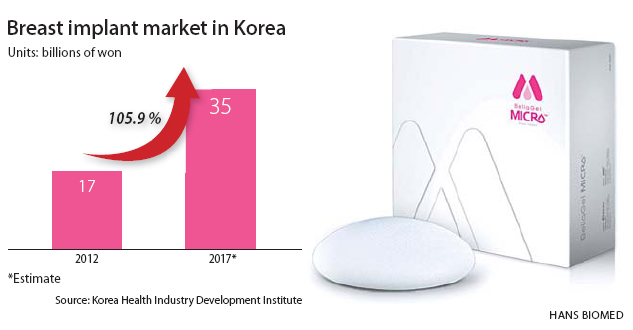 Despite attracting worldwide attention for its plastic surgery market, Korea has only one domestic developer and producer of silicone gel-filled breast implants: Hans BioMed.

On Thursday, the Kosdaq-listed company introduced BellaGel Micro Golden. According to Hans BioMed, the implant looks and feels better, improves safety and is available in more sizes than products from competitors. The Golden line is being added to the existing BellaGel Micro line, commercialized last year for women undergoing reconstruction, augmentation or revision surgeries.

The new product comes in 30 sizes depending on breast diameter, volume and projection.

Breast implants have traditionally been available in two textures. One is macro, which has a coarse surface and has dominated the market since gel-filled implants were developed in the 1960s. The other is smooth.

Hans BioMed, along with U.S.-based Motiva, introduced the next-generation micro category, which has qualities somewhere between the two dominant types already in the market.

“BellaGel Micro Golden, filled 100 percent with highly cohesive and resilient gel, has the best possible surface texture and shape,” said Seul Chul-hwan, a plastic surgeon at the JW Plastic Surgery center in Seoul, at a press conference for the new product, “It thus offers a feel that is closest to the real breast and changes shape according to body movement. I think it is the most desirable breast implant to date.”

The Korean Ministry of Food and Drug Safety has approved the sale of the Golden line.

Plastic surgery providers in Korea are set to use the new implants starting at the end of this month.

Hans, which currently exports breast implants to 30 countries, is seeking to conduct clinical trials in the United States and China for eventual approval from relevant authorities.

In the United States, the company is aiming to launch sales of the new product by 2023 at the earliest.

“Once we obtain approval from the U.S. FDA, our product will become a game changer in the global breast implant market,” said Lim Min-kyu, marketing manager at Hans.

Dr. Seul added that the majority of breast implants used in the United States are those that were developed in the early 1990s.

The lag in introduction is largely due to regulations that he believes are “excessively stringent.”

Breast surgeries are the most popular cosmetic procedure globally, making up 15.8 percent of all cosmetic surgery in 2016, according to data from the International Society of Aesthetic Plastic Surgery.

By geography, North and South America account for 51.1 percent of all plastic surgeries, followed by Europe, Middle East and Africa at 38.5 percent. Asia Pacific comes in third with 10.4 percent.

Korea is an exceptional market. It is No. 4 globally for cosmetic surgery, while the breast implant surgery market in the country has grown by an average of 13.8 percent a year between 2011 and 2016, hitting an estimated 35 billion won ($30.9 million) in 2017.

Allergan and Mentor Worldwide used to provide 40 percent of breast implants sold in Korea, but the situation has been changing rapidly since Hans released the BellaGel Micro line last year.

Now, Hans and Motiva each control about 25 percent of the breast implant market in Korea. Mentor and Allergan are now below 20 percent each, according to Lim.