‘You cannot innovate without flexibility in the labor market’

‘You cannot innovate without flexibility in the labor market’ 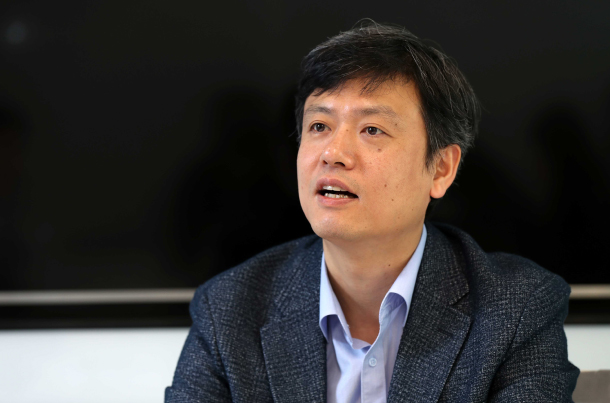 Chang Byung-gyu, Chairman of the Presidential Committee on the Fourth Industrial Revolution

Chang Byung-gyu joined the Presidential Committee on the Fourth Industrial Revolution as its chairman a year ago. He started off his term hoping to usher in a new era of innovation with deregulation and advancements in artificial intelligence and big data.

The Fourth Industrial Revolution Committee celebrated its first birthday on Oct. 11, but its report card doesn’t show much, except for helping to ease regulations on internet banks. Critics argue that Chang is too young and lacks the experience to effectively assume a position that gives him a direct line of communication with the president.

Chang, now 45, built his career in the gaming industry. He founded Neowiz Games in 1997, and currently serves as the chairman of board for Bluehole, which developed the best-selling online multiplayer game PlayerUnknown’s Battlegrounds. The Blue House recently requested Chang take up a second term. He accepted.

Below is an excerpt of an interview the JoongAng Ilbo conducted with Chang at his office in Seocho-dong, southern Seoul, on Oct. 4.

Q. How would you assess the performance of the Fourth Industrial Revolution Committee over the past year?

A. I don’t think we lived up to expectations. Though we made small steps, we didn’t bring a “revolution,” even though that’s part of our name. One reason is my lack of experience. I didn’t realize the full complexity of party politics. Previously, I thought that the president could push for anything that he or she wanted, but that wasn’t the case. There are those demanding innovation by quickly removing regulations, while others argue the need for protection. Much time had to be spent in preparing to mediate conflict.

Do you believe government officials are reluctant to deregulate?

Yes, and I realized why while working in the committee. Bureaucratic society does not promote or compensate public servants for their efforts in pushing for innovation. Also, sudden change may lead to confusion. It has long been the bureaucrat’s role to prevent chaos while achieving change gradually.

Can innovation be possible without solving this problem?

Innovation is something that the private sector is good at. The government should employ companies and civilians as the main agents of change, and the Blue House should mediate when it clashes with government officials who want gradual change.

Is the Blue House doing a good job at mediating?

On South-North Korea relations, it seems to be doing well overall. But when it comes to economy and innovative growth, it falls short.

What do you think hinders innovative growth?

There are two main factors — the inflexible labor market and a social climate that discourages innovation and entrepreneurship. There are only a few innovators in every organization. The rest of an organization’s members usually oppose change and block innovation. We need to get rid of the people obstructing the change-makers. If not, even conglomerates can fail. We won’t be able to achieve innovative growth without labor flexibility.

What policies should the government pursue to boost flexibility in the labor market?

We need to make gradual changes to prevent negative side effects. There will be a huge boost to innovation if companies can fire just 2 percent of their high-salaried employees. Though 2 percent doesn’t sound like much, such a move will send a signal that the government is not completely pro-labor, but that it is trying to strike a balance between innovation and labor.

I’m not sure whether the Blue House will try to soften the rigidity of the labor market. The issue is also linked to the National Assembly.

Do you think the government is sending out pro-labor signals?

After the government adopted the 52-hour workweek policy, it starting thinking of repealing the blanket wage system, which allows employers to pay a fixed income to employees to compensate for all overtime work.

The government should reconsider revoking the blanket wage system. We cannot revoke the 52-hour workweek policy because it’s already in effect. But moves such as Finance Minister Kim Dong-yeon’s call for flexible working hours to help companies given shortened workweeks remain competitive gives an impression that the government is pushing for innovation.

What is your opinion on activist groups confronting companies about the use of personal data to develop big data technology?

I think it’s important that they’re participating in the debate. Civil activists have always been around and will continue to engage in discussions. Because data privacy is an issue that the Blue House also cares about, a relevant agency is working on it as well. The taxi industry is not participating in the debate on car sharing. It is disputable then whether their concerns should be considered.

What do you think is the greatest feat that the committee achieved?

I think our success lies in adopting a new way of reaching social consensus. I’m referring to Hackathon, an event where we invite parties with different interests to reach a consensus through debate. I think this process is important because consensus is necessary for innovation.

In the United States, where the private sector drives innovation, social problems caused by innovation are addressed through class action lawsuits and punitive damages. Americans have powerful tools to deal with unintended side effects, so they can just focus on preventing a problem from rising in the first place.

But because we don’t have adequate tools in Korea to deal with accidents, we need to form a consensus before making changes to minimize unwanted side effects. Though we may have to compromise on speed because of this, things will move faster after we have more practice in consensus decision making.

Why did you accept the Blue House’s request to serve another term on the committee?

The term for office for chairperson is one year. I told the Blue House that I will not reject the request. I still need to go through some bureaucratic steps before my second term is confirmed. I worried a lot before accepting the offer to serve again. If I had done well, I could have left the committee more easily, but because I felt like I hadn’t done a good job, it was more difficult for me to leave. I want to do better in the second term.

Do you think it’s difficult for the committee to produce impressive results because its role requires deliberation and mediation?

Yes. Basically, we only deliberate on issues that are brought forward to the government. There is a limit to making policies on issues that don’t come up. I don’t see any immediate way of addressing this problem. We have to think about producing results given these restrictions.

What kind of members do you want to have on the committee for the next term?

Last year, when I became chairperson, the civilian members had already been selected. Some of the members appeared to simply be there because they helped the administration come to power. For the upcoming term, I told the Blue House that I would like younger, hard-working members. Innovation requires going against the traditional order. This is better suited to younger people, who tend to have a more defiant attitude and are less familiar with the established order.
We need people who are eager to make their voice heard.