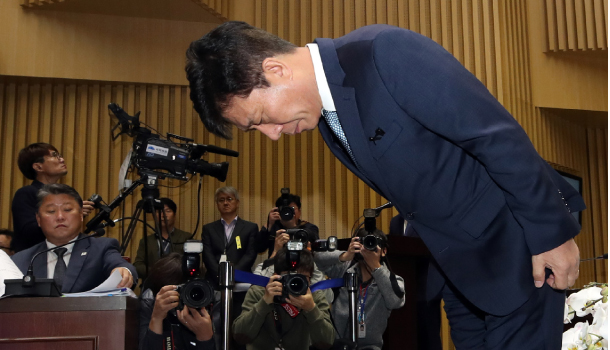 Seoul Metro CEO Kim Tae-ho makes a public apology for the inside information scandal at a parliamentary audit at City Hall, central Seoul, on Thursday. [YONHAP]

The number of former contract workers at Seoul Metro recently upgraded to permanent payroll with the possible help of inside information is believed to be much higher than the 108 originally reported, according to the findings of this week’s parliamentary audit into the company.

Seoul Metro, a public company run by the Seoul city government in charge of subway lines No. 1 through 8, upgraded 1,285 contract workers to the permanent payroll in March, according to Seoul Metro records submitted to Liberty Korea Party Rep. You Min-bong, which the JoongAng Ilbo obtained.

The records were obtained from company interviews with 1,680 original employees conducted as a part of an internal investigation that same month. Among these, the probe found 108 cases of employees with relatives among the new permanent hires. It’s suspected they advised their relatives to take contract jobs because they knew of the plans to upgrade the workers.

But other audit records of Seoul Metro revealed that many other upgraded workers had relatives who were former employees of the company, said Liberty Korea Party (LKP) Rep. Kim Yong-tae at a press conference on Wednesday.

Kim pointed to the company’s labor union as the principal culprit behind the alleged use of inside information. Members of the company’s union are suspected of having encouraged employees to tell their relatives to apply for contract jobs, a Seoul Metro employee told the JoongAng Ilbo on condition of anonymity.

Rumors of the situation circulated within the company immediately after the promotions in March, which prompted its executives to launch an internal investigation later that month. Union leaders told members to categorically refuse to cooperate with this probe through its bulletin, Kim said.

As a result, only 1,680 workers - 11.2 percent of the approximately 15,000 employees at Seoul Metro - complied with the investigation, suggesting that there may be hundreds more involved in the hiring malpractice.

At another press conference on Thursday, Rep. Kim made further allegations of job favors by claiming that the exam taken by applicants vying for permanent positions was deliberately made easy.

“Seoul Metro accepted its labor union’s request to reschedule permanent employee exams to an earlier date to accommodate employee relatives then put out a ridiculously easy test,” Kim said. “Applicants only had to score 60 points out of 100 … and the result was that 93.6 percent of them passed.”

Adding fuel to the controversy is the discovery that the wife of the recruitment head who spearheaded the promotion process was one of the new permanent hires. But the manager, identified only by the surname Kim, is believed to have deliberately omitted his wife from the internal probe to conceal his role in her employment, Rep. Kim said.

The company relieved the manager from his current position on Wednesday and Seoul Metro CEO Kim Tae-ho apologized for the scandal in a parliamentary audit hearing at City Hall the next day.

The scandal - which dominated Thursday’s hearing - has been seized upon by conservative parties to criticize the government’s job policy, which encourages companies to upgrade contract workers to the permanent payroll.

The LKP alleged that Seoul Metro’s union is dominated by members of the Korean Confederation of Trade Unions - the more leftist of the country’s two major labor umbrella organizations - and close to Seoul Mayor Park Won-soon and President Moon Jae-in, who opposition lawmakers said were responsible for letting the malpractice occur.

Park responded to the accusations at Thursday’s hearing, saying he will delegate further inspection of Seoul Metro to the state audit agency and take appropriate measures if there were indeed serious hiring irregularities at the company.