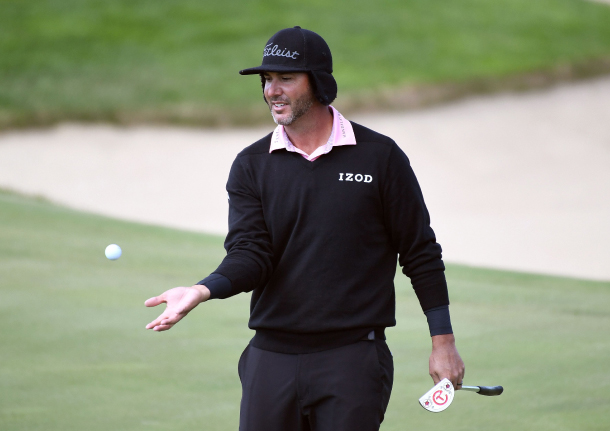 Scott Piercy tosses a ball to his caddy on the 15th hole during the second round of THE CJ CUP @ NINE BRIDGES at the Club at Nine Bridges in Jeju on Friday. [AP/YONHAP]

JEJU ISLAND — The winds held off and the scores kept getting lower on the second day of THE CJ CUP @ NINE BRIDGES at the Club at Nine Bridges in Jeju on Friday.

Scott Piercy of the United States cruised through to the top of the leaderboard with a bogey-free round of seven under par, 65, to take a one shot lead. After starting the second round with pars, Piercy, who started on the par-4 10th, slowly lowered his scores down with back-to-back birdies on holes 14 and 15. By adding another on the par-5 18th, Piercy finished his first nine holes at three under par. Then, Piercy, who was tied for the lead with Brooks Koepka of the United States until the second-to-last hole, finished his round with another birdie on the par-5 ninth to take a one shot solo lead.

“Good day,” Piercy said. “Hit a couple close and then my putter showed up and made some putts of really good length. This week, I’ve continued hitting the ball pretty well, and the putter started to warm up a little bit. Hopefully, the putter will stay there.”

Koepka finished just one shot behind the leader at eight under par. He started his round with back-to-back birdies on the first two holes. Although Koepka had a bogey on the par-5 ninth after a bad tee shot, it didn’t affect the three-time major champion for the rest of the round.
In the back nine, Koepka added two more birdies and an eagle on the last hole to finish his round at seven under par, totaling eight under par over the first two rounds. Koepka finished the day with an eagle, six birdies and a bogey.

“I played really well,” Koepka said after the round. “Felt like I struck it really well. Just had one bad tee shot there on nine but I putted really well. Iron play was very good, consistent, hole high all day and given myself good looks. That’s what you got to do around this golf course.”

Koepka said he was able to take advantage of the wind, as it blew in a different direction than it did during the first round.

Of the Korean golfers at the tournament, Kim Si-woo finished the highest. Tied for 15th, Kim shot one over par in his second round and is now at two under par for the tournament after the first two rounds.

Along with Kim, Kang Sung-hoon, known as Sung Kang, shot an impressive five under par, 67, in the second round to be tied at 15th, at two under par.

“There isn’t much difference in my shots from yesterday,” Kang said. “Yesterday, I wasn’t putting well. So I had a lot of thoughts at the hotel room yesterday and worked on my putting this morning. This led me to putt well and the weather was better than yesterday. I had missed shots from the wind and missed a lot of putts yesterday.”

Paul Casey of England had a special record on Friday, sinking a hole-in-one on the par-3 seventh hole, from 187 yards. Casey became the first player to hit a hole-in-one at the tournament since it started last year. He shot one over par, 73, in the second round and finished the day tied at 30th.

The third round will start at 7:30 a.m. today, with players starting from the first and the 10th holes, at the Club at Nine Bridges.