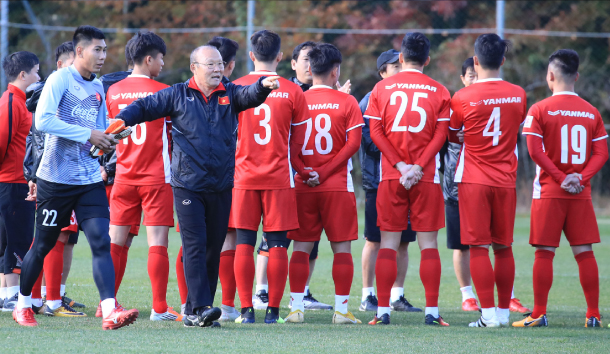 Vietnam national football team head coach Park Hang-seo said Thursday he has yet to think about meeting his home country at the continental tournament next year.

Park is a Korean who earned national hero status in Vietnam after leading their national team to a runner-up finish at the Asian Football Confederation (AFC) U-23 Championship and to semifinals at the 18th Asian Games.

Park was put in an awkward position at the Asian Games in August when Vietnam met Korea in the semifinal. Park’s side then suffered a 3-1 defeat to eventual champions Korea.

When asked about whether he would face the same situation at the 2019 AFC Asian Cup, Park said he has yet to think about another duel against his home country.

Korea and Vietnam are two of the 24 teams that will compete in the 2019 AFC Asian Cup, which will be staged in the United Arab Emirates from Jan. 5 to Feb. 1. Korea is in Group C with China, Kyrgyzstan and the Philippines, while Vietnam is paired with Iran, Iraq and Yemen in Group D.

“We have strong teams like Iran and Iraq in our group, so we have to take at least third place to advance to the next round,” Park told reporters at the National Football Center (NFC) in Paju, north of Seoul. “Our first goal is to pass the group stage. I’ve yet to think about facing Korea.”

Park, who was an assistant coach for Guus Hiddink’s Korea team that reached the 2002 FIFA World Cup semifinal, said he got a positive impression of the Korean national football team under new head coach Paulo Bento. Since the Portuguese took the helm in August, Korea have collected two wins and two draws.

“I couldn’t watch all of Korea’s matches, but I felt that the players are really motivated with the new coach,” he said. “We’ll have to see whether the new foreign coach can work with players to lift Korea’s football status in the world. Since Bento was a great player, I believe he’ll also make a good team.”

Park’s side have been training at the NFC in Paju since Wednesday to fine-tune their preparations for the Association of Southeast Asian Nations Football Federation (AFF) Championship, better known as the Suzuki Cup. The football tournament for Southeast Asian teams will be held from Nov. 8 to Dec. 15 in Thailand.

“I didn’t think about having a training camp in Korea, but our chief assistant coach Lee Young-jin recommended it,” he said. “Since 2002, this is my first time visiting the NFC for team training, although I did come here before for education programs.”

Park said Vietnam are aiming to reach the final at the AFF Championship. The last time Vietnam played in the final was in 2008 when they lifted the trophy.

“We’re in Group A and will face Laos, Malaysia, Myanmar and Cambodia,” he said. “Vietnam media think Thailand are the favorites. We need to advance to the semifinal as the group winners first.”

Park’s Vietnam will stay at the NFC until the end of this month and will have friendly matches with Korean pro football clubs.