Water quality is not getting better

Water quality is not getting better 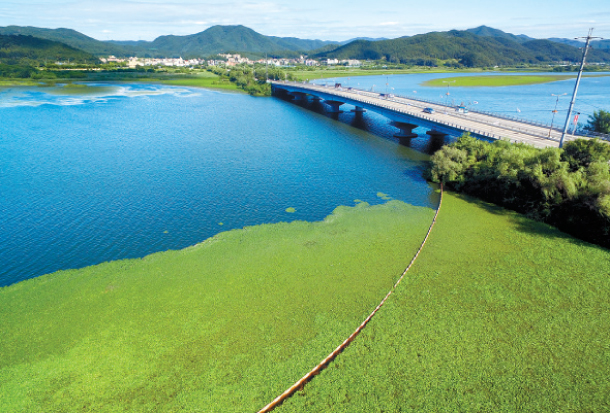 Paldang Lake, a source of water for 20 million residents in the capital region, is covered with thick algal bloom in the scorching heat wave of August. [NEWS1/YONHAP]

KANG CHAN-SU
The author is an environmental news reporter for the JoongAng Ilbo.

Paldang Lake is the water source for 20 million residents in the capital region. In the 1990s, the water quality of the lake was the report card for the Ministry of Environment. A 0.1 parts per million (ppm) increase of the biological oxygen demand, or BOD, would garner media attention. But now, Paldang Lake is out of the spotlight. As the Lee Myung-bak administration promoted the Four Rivers Project, the Nakdong River — where half of 16 reservoirs are located — stole the attention.

Then what has happened to the water quality of Paldang Lake? At the National Assembly Environment and Labor Committee’s inspection on the Han River Basin Environmental Office on Oct. 18, Democratic Party lawmaker Jeon Hyeon-heui pointed out that over 6 trillion won ($5.3 billion) has been invested in water quality improvements at the lake from 2009 through this year, but the water quality hasn’t improved.
The BOD had improved from 1.3 ppm in 2009 to 1.1 ppm in 2011, but it returned to 1.3 ppm in 2015 and 2016. The average has been 1.3 ppm until August this year. The chemical oxygen demand, or COD, also improved from 4 ppm in 2009 to 3.5 ppm in 2014 and 2015, only to rise to 3.9 ppm in 2016. This year, it remained at the same level until August. The rise of COD is noticeable, as it was only 2.9 ppm in 1999.

A total of 1.37 trillion won from the central government’s budget and 234.3 billion won from local governments have been poured into water quality improvement projects for Lake Paldang since 2009, including the wastewater treatment facility expansion. The Han River System Maintenance Fund contributed 4.5 trillion won. The fund is created from water usage fees that are collected in water bills and used for installation and operation of wastewater treatment facilities, resident support projects and the purchase and maintenance of lands around the waterside areas.

Rep. Jeon said that 6.1 trillion won has been invested in the past 10 years, but the Ministry of Environment and other responsible agencies did not show a will to improve the water quality of the lake and focused on barely keeping the status quo.

A Han River Basin Environmental Office official explained that the water quality would have been worse without the investment as the population and polluting facilities increased around the Han River basin, including upper Paldang Lake. However, it was pointed out in the National Assembly’s audit of the government that some money was wasted when the Ministry of Environment purchased an unnecessary waterside lot located within the wastewater treatment area for 10.7 billion won.

A professor of environment at Kangwon National University said that improving water quality is difficult because farms near the water source are excessively using manure. Purchasing lands near the upper stream of the river system would help prevent pollution, he advised.

A total of a 9.2 trillion won has been invested in Paldang Lake since 1999. Now, we need to carefully plan how to use the budget to actually improve water quality.