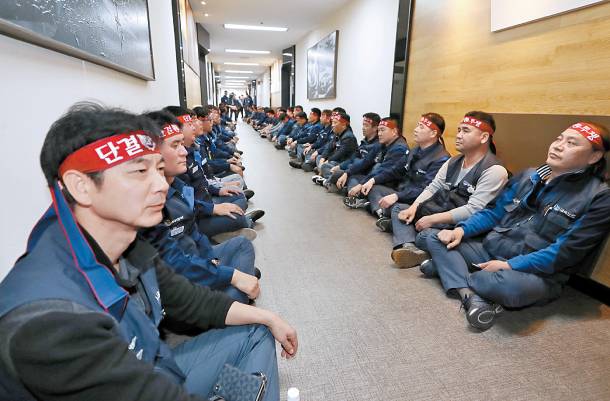 GM Korea’s unionized workers occupy the hallway leading to the GM Korea chief executive’s office at the company’s headquarters in Bupyeong District, Incheon, on Friday in an effort to stop a shareholders’ meeting from taking place.[YONHAP]

A GM Korea shareholders’ meeting Friday decided to spin off its R&D and design department, reigniting conflict with its labor union and the state-owned Korea Development Bank (KDB), the automaker’s second-largest stakeholder.

“The plan to establish a dedicated engineering unit, GM Technical Center Korea, was approved during the shareholders meeting,” GM Korea said in a statement.

However, the decision is guaranteed to be controversial since KDB, which owns 17-percent of GM Korea, intended to vote against the spinning off of R&D and design unit from production but missed the shareholders’ meeting.

“We received notification of the shareholders’ meeting, but the decision was made in our absence,” an official at the KDB bank said. “We were not able to exercise our veto rights since we weren’t there.”

KDB said it will be looking into the legality of the meeting.

On Thursday, KDB released a statement saying it would ask GM Korea’s management to explain fully its decision to spin off the R&D and design center and decide whether to exercise its veto rights.

The statement was released after a court in Incheon rejected KDB’s request for an injunction to stop the shareholders’ meeting.

“Although we respect the judgment of the Incheon court, we have deep concerns about GM Korea’s push to spin off [R&D and design] without sufficient explanation or agreement from the interested parties during the shareholders’ meeting,” the bank said in the statement.

GM Korea’s union claims the spin-off is the first step in a long-term plan to completely halt domestic production.

KDB has the right to nullify any GM Korea decision to sell more than 20 percent of its total assets, which is supposed to prevent the U.S. automaker from pulling out of Korea or restructuring without the consent of the bank.

That right, which expired in October 2017, was reinstated after GM and the Korean government reached an agreement in April.

However, it’s not clear whether that veto right can be applied to spinning off units within GM Korea. There’s even arguments that the newly forming center may not account for 20 percent of the automaker’s total assets.

The union tried to stop the shareholders’ meeting by occupying a hall leading to GM Korea CEO Kaher Kazem’s office in Bupyeong District, Incheon. The union earlier this week voted in favor of a walkout that will likely take place next week.

A crisis that led to the shutdown of one of GM Korea’s four plants in Korea in May seemed to have been solved when GM and the Korean government reached an agreement after long negotiations to inject $7.15 billion into the struggling automaker. GM agreed on covering $6.4 billion while KDB put up $750 million. GM agreed to keep the local unit going for at least 10 years.

But in July, GM Korea announced the spinning off of its R&D center, which will turn Korea into its global strategic development and design center for next generation models.

Meanwhile, production of compact vehicles will end in 2022 and factories will concentrate on SUVs.

“The establishment of a dedicated GM Korea Technical Center is an important development in continuing our organization,” said GM Korea CEO Kazem in a letter sent to employees on Monday, adding that the new center would help to “more effectively respond to and secure and execute global engineering projects.”