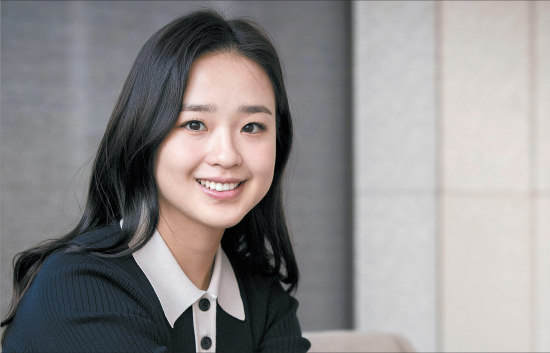 Son Yeon-jae poses for a photo at the Four Seasons Hotel Seoul on Oct. 11. [JANG JIN-YOUNG]


It’s been just a year and a half since rhythmic gymnast Son Yeon-jae hung up her leotard for the last time, but she is already ready to return to the world of sports. Son won’t be returning to the gymnastics floor. Instead, she has her heart set on a career in sports administration.

“After retirement, I got rid of rhythmic gymnastics in my head,” Son said. “Instead, I’ve done a variety of things that I couldn’t do while I was competing. I played golf as a hobby and traveled. But since I’m graduating this year, I had a lot of thoughts about what I’m going to do after. In the end, I learned that rhythmic gymnastics is what I’m good at, so I thought about how I can improve Korea’s rhythmic gymnastics. I planned this project myself.”

Son is a living legend in rhythmic gymnastics. When she made her debut on the senior stage, Son won bronze at the Guangzhou Asian Games in November 2010. After finishing fifth in the all-around women’s individual at the 2012 London Olympics, she started to get international recognition.

At 2014 Incheon Asian Games, Son became the first Korean rhythmic gymnast to win gold in the women’s individual all-around. But that wasn’t the end as she went on to win three titles at the 2015 Gwangju Summer Universiade. Then, at the 2016 Rio Olympics, Son’s last international event before her retirement, she finished fourth in the all-around, the best finish ever by an Asian rhythmic gymnast.

As her successful career came to an end, Son’s early retirement and her continuous appearances on television led to rumors that she planned to become a TV personality. Son made it clear that she has no intention of entering the world of entertainment.

“The entertainment industry is a tough field,” Son said. “I appeared in newspapers and on television a lot to spread the popularity of rhythmic gymnastics, but I don’t want a TV personality to be my job.”

While Son was an athlete, she was never able to do or eat what she wanted as she was always on a diet and in pain from offseason training in Russia. She also struggled mentally due to the negative comments she received online.

“After I retired, I ate food that I wanted to eat until I got sick of it,” Son said. “But now I want to be a good role model for young gymnasts, so I’ve been training hard. When I was an athlete, I had a hard time dealing with all the rumors, but I don’t care about them anymore. It’s more important for me to stand up for Korea’s young and future rhythmic gymnasts.”

Now, rather than returning to the field as a gymnast, Son set her goal on improving the sport by being a sports administrator.

“On the plane back from Rio Olympics, I got close to International Olympic Committee member Yoo Seung-min,” Son said. “He travels around the world to talk about Korean sports, and that left a strong impression on me. I want to further expand my role outside of Korea and want to become an administrator by improving rhythmic gymnastics in Asia.”

In rhythmic gymnastics, Russia and Eastern European countries have long dominated, but Son successfully managed to compete against them and get her name known. Recently, Son was invited to a workshop at the International Gymnastics Federation. In addition to the gymnasts, the majority of federation members are Europeans.

But Son hopes to change that by getting nominated as a member of the International Gymnastics Federation.

“In addition to Korea, I want to help rhythmic gymnasts in Korea,” Son said.

Son will take her first step in improving the sport by hosting her first Gymnastics Project at KBS Arena on Oct. 26 and 27. The workshop will not only have Korean rhythmic gymnasts but it’ll also host rising starts and coaches from Asian countries like Japan, Hong Kong and Singapore at the workshop.