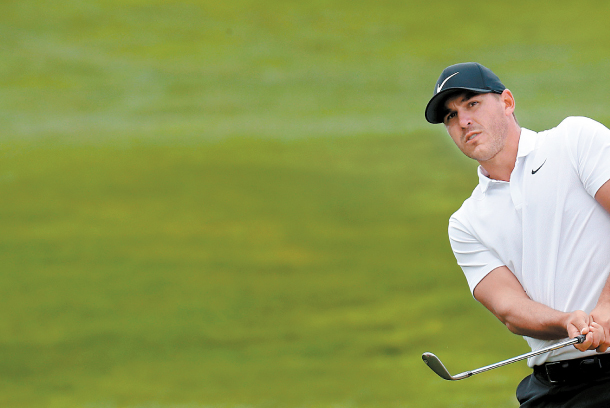 Brooks Koepka of the United States watches his chip shot on the par-4 16th during the final round of THE CJ CUP @ NINE BRIDGES at the Club at Nine Bridges in Jeju on Sunday. [YONHAP]

JEJU ISLAND — Brooks Koepka of the U.S. started his season with a victory at THE CJ CUP @ NINE BRIDGES at the Club at Nine Bridges in Jeju on Sunday.

Playing with almost no wind on the final day, the players shot low scores to make their way up the leaderboard of the tournament in Jeju, and Koepka successfully maintained his four-shot lead to pick up his fifth career PGA Tour victory and claim the top spot in world rankings.

“It’s absolutely amazing,” Koepka said. “It’s amazing to go world number one. I never thought in my wildest dreams I’d be the best golfer in the world. I can’t even put it into words.”

Koepka, who started the final round with a four-shot lead, got off to a slow start in the front nine, shooting one under par. While he struggled in the front nine, Gary Woodland of the U.S., who played two groups ahead of Koepka, quickly made his way up the leaderboard with six birdies in the first nine to tie for the lead. 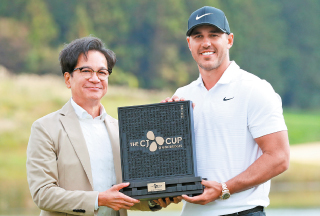 But just as he did in his third round, Koepka achieved a streak of birdies in the back nine to secure the top spot on the leaderboard. Woodland continued to work for the lead, but Koepka didn’t give him a chance. Woodland’s back-to-back birdies on the 12th and the 13th hole allowed him to share the lead with Koepka, but moments later Koepka got away by making back-to-back birdies on those exact same holes.

It came down to the par-4 16th hole. While holding a one shot lead, Koepka hit his tee shot into the bunker. Another shot from the bunker led him to miss the green. But missing the green wasn’t much of a problem for Koepka, as he successfully chipped in for a birdie to extend his lead by two as Woodland made a bogey on the par-3 17th.

“For that to drop, I definitely felt like I won the tournament right then and there,” Koepka said.

Having almost secured his victory on the last hole, Koepka finished in style, making an eagle to complete the tournament at 21 under par. With one eagle, eight birdies and two bogeys, Koepka shot eight under par, 64, in the final round to finish the tournament four shots ahead of Woodland.

“It’s amazing to grind out today,” Koepka said. “Didn’t get off to a best start, the way I wanted. I felt like I was one up on [Ian] Poulter after about four, five holes and then the next thing you know I am tied with Gary [Woodland].”

Since turning professional in 2012, he has won 12 tournaments in seven countries. Koepka, who won the Sir Henry Cotton Rookie of the Year award in 2014, picked up his first PGA Tour victory in 2015, at the Waste Management Phoenix Open. Then, in 2017, Koepka won his first major title at the U.S. Open. Koepka continued in 2018 by picking up two more major titles – the U.S. Open and the PGA Championship. With two major titles, Koepka was selected as PGA Tour’s Player of the Year for the 2017-18 season. Koepka is now focused on maintaining momentum and staying in good shape.

“I keep the same goals through the calendar year,” Koepka said. “I like to really play well, really like to focus and make sure my game is in a good place. This offseason, I’ll really get to it and be prepared and stay healthy. I need to be healthy and be able to play at all these events and play all the majors.”

The inaugural champion Justin Thomas finished tied for 36th with a final round score of four under par, totaling five under par for the weekend. Adam Scott of Australia, 2013 Masters champion, shot nine under par, 63, on the final round to finish the tournament tied for 10th.

Ryan Palmer of the U.S. shot the daily best score in the final day, 10 under par, 62, to finish the tournament third at 15 under par. Palmer achieved seven straight birdies in the last seven holes. His score is a course record.

Of the Korean golfers, Kim Si-woo had the best finish, tied for 23rd, with a final round score of one under par, totaling seven under par for the weekend.

This is the only PGA Tour event hosted in Korea, and all 78 players got to play through the weekend, as the tournament didn’t have a cut.
The PGA Tour will continue its season in Asia at World Golf Championship – HSBC Champions, which runs from Oct. 25 to 28, at Sheshan Golf Club in Shanghai, China.