A question of official transparency

A question of official transparency 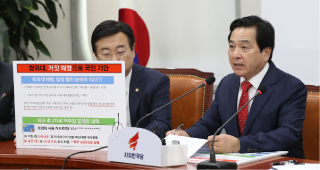 Liberty Korea Party lawmaker Shim Jae-chul on Oct. 15 attacks the Blue House for its explanations about how it spent its expenses. [NEWS1]

Private kindergartens are under fire. Many petitions calling for the strict punishment of kindergarten corruption are posted on the Blue House website, and online communities have numerous postings by concerned parents.

While I agree with the national concerns and outrage, I find one thing frustrating. The controversy started when inspections on municipal and provincial offices of education were made public. Everyone talks about the inspection findings. At the vice-superintendents meeting on October 18, additional inspections were discussed.

Inspections of kindergartens are needed, but they cannot solve all the problems. It is more important to prevent such corruption. I believe the answer is transparency. Taxpayers have a right to know where their tax money is being used. If the accounting reports of the private kindergartens that receive subsidies from the government are transparently released — and if parents have access to this information — would kindergartens be able to waste their budgets so brazenly?

As the controversy spread, the Ministry of Education announced a plan to introduce a national accounting system. But the government also showed its lack of awareness in the power of disclosure.

Last month, the Ministry of the Interior and Safety announced that Korea was ranked fourth in the Open Data Barometer (ODB) published by the UK-based World Wide Web Foundation. The ODB reviews the openness of public data and quality of the data of each government. The ministry seemed complacent as Korea was ranked higher than Japan, at seventh, and the United States, at ninth. But Korea received low marks in terms of the detail of data on government spending.

Why is the government spending data so poor? Before the private kindergarten controversy, there was the dispute over Blue House operation spending. Opposition lawmaker Shim Jae-chul allegedly unlawfully obtained and released the data, but the Center for Freedom of Information and Transparent Society claimed that Shim’s release would not have happened if the Blue House had been open about its operation spending. It doesn’t make sense that spending details are not made open because of confidential information. The lack of transparency may be the reason why Korea scored so low in providing data on government spending.
.
JoongAng Ilbo, Oct. 19, Page 34