As the world is fast-progressing toward a zero-emissions society where vehicles run without emitting harmful pollutants, electric vehicles powered by lithium-ion batteries have rapidly emerged as the most common replacement for internal-combustion engine.

Further advancement of technology, however, has put a new kid on the block: hydrogen-powered fuel-cell electric vehicles (FCEV). But using hydrogen is controversial, perhaps because many people relate hydrogen to bombs. Some critics also say it is not energy-effective with Tesla CEO Elon Musk even describing hydrogen fuel-cells as “mind-bogglingly stupid.”

Nonetheless, global automakers like Toyota and Hyundai Motor are making hefty investments in the new technology, believing it will ultimately overtake lithium-ion battery-powered vehicles. German carmakers like Mercedes-Benz and Volkswagen have also recently jumped on the bandwagon.

Here are the basics on whether hydrogen can take the lead in the future zero-emission society.

Q. What are FCEVs?

Hydrogen fuel-cell cars are electric vehicles that are powered by electricity generated through a chemical reaction between hydrogen and oxygen. In the vehicle, oxygen is inhaled through the intake where it mixes with hydrogen stored in a high-pressure tank placed under the hood.

Using platinum as a catalyst, the two elements react, producing electricity with water as the only byproduct. FCEVs are known as the “ultimate eco-friendly car” because water is such an environmentally friendly byproduct. The vehicles are refueled in much the same way as a standard internal-cumbustion engine car, except rather than pumping in gas, pressured hydrogen flows into the tank.

Q. How do they differ from lithium-ion battery-powered electric cars?

Besides the fact that they are both powered by electricity, hydrogen- and lithium-ion-powered vehicles don’t have much in common. The range, charging time and means of creating electricity differ dramatically between the two kinds of electric cars.

Lithium-ion battery cars can be charged using regular electricity through the local grid via a charging station or even with converters, using sockets at home. Hydrogen cars, on the other hand, need to be refueled at stations constructed by either the government or private firms.

When it comes to charging or refueling time, however, hydrogen-powered vehicles win in terms of convenience. While a normal electric vehicle takes at least an hour to charge, even when using the rapid charge system, an FCEV takes less than five minutes.

When it comes to driving distance, hydrogen cars also take the lead, boasting a 600-kilometer (372-mile) range per tank. No lithium-ion battery-powered vehicle, even a Tesla Model S, has a range of more than 500 kilometers.

Q. Which companies have invested in FCEVs?

Korean and Japanese automakers have been active in manufacturing FCEVs. Although Korea’s Hyundai Motor was the world’s first carmaker to mass produce an FCEV - the Tucson ix - in 2013, Japanese carmakers like Toyota and Honda have some of the most competitive vehicles in the market, the Toyota Mirai and Honda Clarity.

Japan has set 2020 as the tipping point for FCEVs, when tens of thousands of international sports fans will gather in Tokyo to watch the Summer Olympics. The Japanese government plans to distribute 40,000 FCEVs and set up 160 charging stations in time for the Olympics, although it currently has just 100.

Western carmakers have only recently started to enter the market. General Motors partnered with Honda on FCEV R&D, while Volkswagen joined forces with Hyundai Motor earlier this year. Mercedes-Benz unveiled its GLC F-CELL SUV, a combined fuel-cell and plug-in hybrid, earlier this month.

Q. What are the drawbacks of FCEVs?
The high price and lack of charging infrastructure has stopped the FCEV market from advancing further. The complexity of the technology inevitably led to much higher prices than standard electric vehicles. The latest car on the market, Hyundai Motor’s midsize Nexo SUV, comes with a sticker price starting at 68.9 million won ($60,830).

Lithium-ion battery-powered vehicles are much cheaper as the technology has been more commercialized and demand has increased, enabling economies of scale. Hyundai Motor’s small SUV Kona Electric starts at 46.5 million won.

The lack of infrastructure is also a major hurdle. In Korea, there are some 12 charging stations for FCEVs even when including ones that are only used for research purposes, whereas some 700 charging stations have been registered for lithium-ion battery-powered cars, according to the Ministry of Environment. 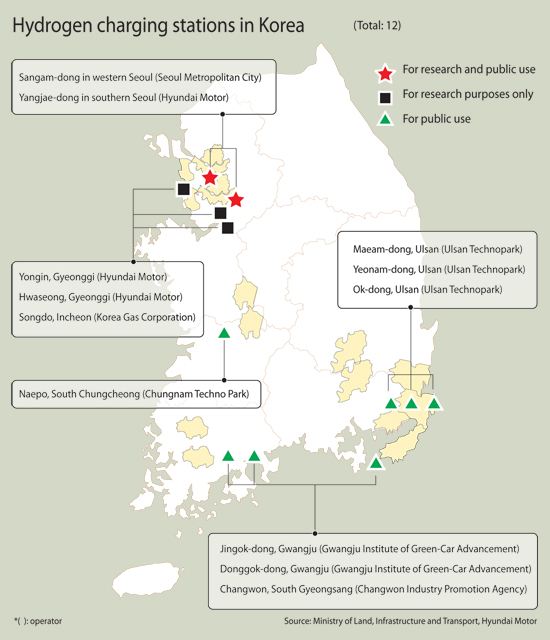 Q. Are they safe?

A general fear of hydrogen, with many people correlating the element with explosives, may have hindered the spread of FCEVs.

Despite fears, industry experts say that FCEVs are just as safe as other vehicles. Even if hydrogen leaks outside the tank - which is what people are afraid of - experts say the hydrogen molecules are too light and not dense enough to explode when coming into contact with air. Acknowledging such concerns, carmakers are putting extra effort into ensuring safety as well.

According to Hyundai Motor, the pressured hydrogen tank installed inside the Nexo has gone through various tests in various countries, including being compromised and shot. It says the tank can even endure a furnace.

This is the question that automakers, researchers and pundits haven’t been able to answer. Those who support FCEVs emphasize the eco-friendliness and sustainability of hydrogen as it is one of the most common molecules on earth. Lithium-ion battery EVs, however, don’t emit pollutants while driving, but still require electricity that has been generated elsewhere, likely with some level of pollution - most electricity available at charging stations are generated at coal-fired power plants that emit pollutants just as harmful as internal-combustion engines.

Supporters of EVs point out that FCEVs are expensive and potentially explosive. Experts expect that FCEVs and EVs will complement each other, with FCEVs becoming more suitable for long-distance driving and EVs for shorter journeys.

Q. Is there still a push for a hydrogen economy?

Korea has been active in promoting hydrogen as the next-generation source of energy, possibly thanks to Hyundai Motor’s prominent role in the FCEV market. President Moon Jae-in also seems to be very fond of the new eco-friendly powertrain, having ridden in the Nexo twice this year.

The government and related companies pledged to invest a combined 2.6 trillion won until 2022 to further promote FCEVs. Their goal is to distribute some 16,000 fuel-cell powered cars in Korea and build 310 charging stations.