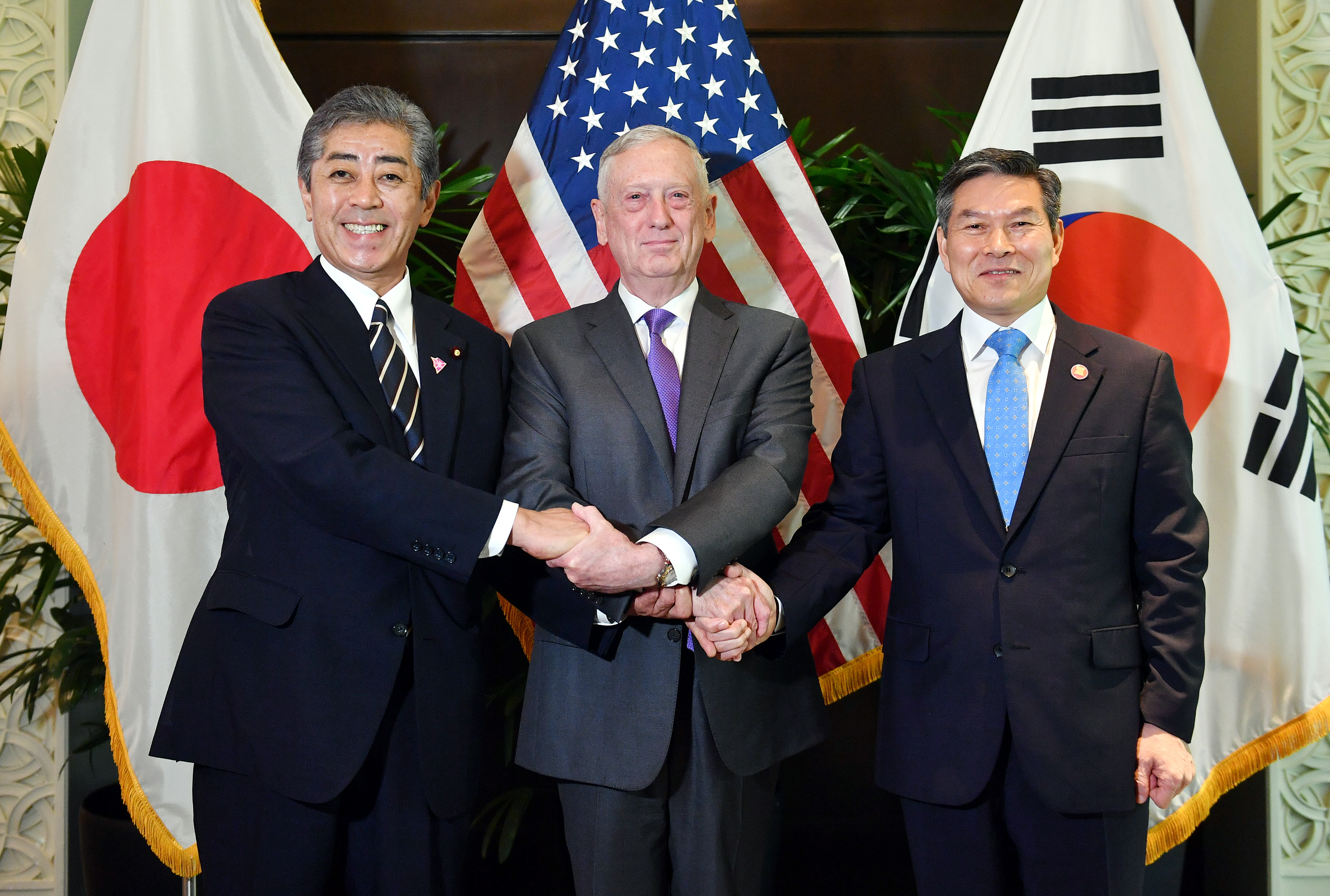 South Korea and the United States decided to suspend the Vigilant Ace joint aerial exercise slated for December in consideration of ongoing diplomatic efforts with North Korea, the latest cancellation of joint drills this year.

The Ministry of National Defense reported in a statement issued Saturday that Defense Chief Jeong Kyeong-doo and his U.S. counterpart Secretary of Defense James Mattis discussed military measures aimed at helping establish a permanent peace regime in the region, “including suspension of the Vigilant Ace drill” during their meeting at the 2018 Association of Southeast Asian Nations Defense Ministers’ Meeting (ADMM-Plus) in Singapore.

“The defense ministers of the two countries discussed measures to provide military assistance for the purpose of achieving complete denuclearization and establishing a permanent peace regime on the Korean Peninsula at the ADMM-Plus meeting,” said the Defense Ministry. “The two ministers agreed on such military measures, including suspension of the Vigilant Ace drill,” it continued.

The Pentagon also issued a statement Friday announcing the drill suspension, saying it had made the decision “to give the diplomatic process every opportunity to continue.”

Vigilant Ace, an annual joint drill that first began in 2015, involved 230 military jets, including U.S. F-22s and F-35A stealth jets, and 12,000 personnel last year after exchanges of verbal vitriol between North Korean leader Kim Jong-un and U.S. President Donald Trump, who later met at a summit in Singapore in June.

The presence of U.S. fighter jets during the exercise last year elicited strong condemnation from Pyongyang, which considered such aerial assets a direct threat to its national security.

In August, U.S. Defense Secretary Mattis said while Seoul and Washington had taken steps to suspend “several of the largest exercises as a good-faith measure coming out of the Singapore summit,” he cautioned the U.S. had “no plans at this time to suspend any more exercises,” a remark that experts saw as a warning to the North that such “good-faith measures” could be wound up if the North failed to make concrete denuclearization steps.

The fact that the U.S. also decided to drop the joint aerial drill underscores Washington’s wiliness to continue dialogue with Pyongyang.

The cancellation came as President Moon Jae-in is championing a peace initiative to persuade North Korea to give up its nuclear arsenal in exchange for security guarantees from the U.S. During a nine-day trip to Europe that ended Sunday, Moon repeatedly stated that North Korean leader Kim made it clear to him that he was sincere about ridding his country of nuclear weapons as long as the U.S. guarantees his regime’s security.

Moon went out of his way to call for the easing of economic sanctions on North Korea when it is determined the North had entered an irreversible stage of denuclearization during a summit with President Emanuel Macron of France in Paris on Oct. 15. It was the first time he asked a head of a foreign state to consider lifting sanctions on the North, even on a conditional basis.

The joint marine training exercises were originally planned to take place 19 times this year, but in light of the diplomacy revolving on North Korea, the number of drills this year was reduced to 11.

With the ongoing North-U.S. talks on denuclearization, a senior U.S. administration official said Friday the second summit for Kim and Trump would likely take place early next year, according to Reuters. “A meeting is likely sometime after the first of the year,” the official was quoted as saying to a group of reporters without elaborating further.

The official’s comment came after Trump said on Oct. 9 that his next meeting with Kim would take place after the Nov. 6 midterm elections. “It’ll be after the midterms. I just can’t leave now,” he said.

In an interview with the Voice of America on Friday, U.S. Secretary of State Mike Pompeo said he was “very hopeful” to meet his North Korean counterpart in the coming days, without clarifying whom he meant as his counterpart.

“I’m very hopeful we’ll have senior leader meetings here in the next week and a half or so between myself and my counterpart to continue this discussion so that when the two of them get together there is real opportunity to make another big step forward on denuclearization,” the top U.S. diplomat said.

Pompeo’s remark left many wondering if Kim Yo-jong, sister of North Korean leader Kim, could fly to the U.S. in about 10 days to meet with Pompeo and possibly set a date and venue for the second North-U.S. summit.

Kim, who serves as vice director of the Worker’s Party, is one of the most trusted aides of the North Korean leader. The sister accompanied her brother on every overseas trip that Kim Jong-un took this year. She also sat by Kim during his meeting with Pompeo in Pyongyang on Oct.7. She was the only official who was at the table except for an interpreter, underscoring the level of influence she wields.