Moon had a busy European tour

Moon had a busy European tour 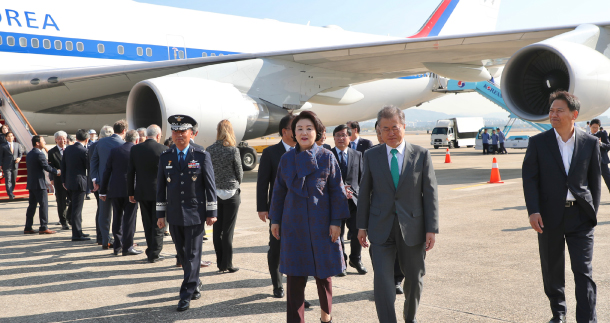 President Moon Jae-in and his wife, Kim Jung-sook, return home from their nine-day Europe tour on Sunday and are greeted by lawmakers and officials at the Seoul Air Base in Seongnam, Gyeonggi. [YONHAP]

President Moon Jae-in returned home Sunday after a high-stakes trip to Europe that sought to rally international support for his efforts to denuclearize North Korea and establish peace.

Moon’s European tour began last Saturday when he embarked on a four-day state visit to France.

In Rome, he made an official visit to the Vatican for what the Holy See called a rare and exceptional meeting with Pope Francis.

The president delivered an invitation from North Korean leader Kim Jong-un for the pope to visit Pyongyang.

The pope, to the apparent amazement of many, said he will be “available” to make such a trip when officially invited by North Korea.

The Vatican earlier said the pope’s trip may require certain changes on behalf of the communist state, including a guarantee of freedom of religion.

While in Paris, the president asked France, one of five permanent members of the UN Security Council, to consider easing UN sanctions against Pyongyang when the North’s denuclearization reaches a point of no return.

He made a similar request when he met with British Prime Minister Theresa May on the sidelines of the Asia-Europe Meeting summit in Brussels. Britain is also a permanent member of the UNSC.

Both May and French President Emmanuel Macron stressed the need to maintain pressure on North Korea to make sure the communist state will “completely, verifiably and irreversibly denuclearize.”

Still, they have also agreed on the need to find ways to encourage the North to accelerate its denuclearization process, Moon’s presidential office Blue House said earlier.

Moon has held three bilateral meetings with the North Korean leader, with their last summit held in Pyongyang last month.

Kim has agreed to reciprocate Moon’s recent trip with a visit to Seoul, possibly before the year’s end.

Kim, if he visits Seoul, will be the first ever North Korean leader to do so at least since the end of the 1950-53 Korean War, which ended only with an armistice, technically leaving the divided Koreas still at war.

Moon’s departure from Copenhagen, the last leg of his five-nation trip, came after he attended the inaugural summit of the Partnering for Green Growth and the Global Goals 2030, or P4G.

There, he stressed the importance of joint efforts by both the public and private sectors to address major global challenges, such as poverty and climate change.

In a bilateral summit, the leaders noted the countries’ strategic partnership has contributed to strengthening their cooperation in various sectors, ranging from energy and food and agriculture to life science and maritime affairs.

They agreed to further expand the countries’ cooperation into new areas, including health and welfare.

“President Moon and Prime Minister Rasmussen further highlighted the positive development in bilateral cooperation on life science, and agreed to further strengthen their partnership on pharma/bio tech, digital health and welfare,” they said in a joint press statement.

The countries established a diplomatic relationship in 1959. It was upgraded to a strategic partnership in 2011.

Noting that the year 2019 will be designated Cultural Year in both countries to mark the 60th anniversary of the establishment of their diplomatic ties, the leaders expressed hope that the year would serve as a testament to the importance of their partnership and people-to-people exchanges.

They expressed satisfaction with what they called the countries’ fast-growing economic relations and vowed efforts to further strengthen their bilateral trade and also fight global protectionism.

Rasmussen expressed his full support for the diplomatic initiatives undertaken by President Moon through the three inter-Korean summits to improve inter-Korean relations and achieve complete denuclearization of the Korean Peninsula.

“President Moon highly appreciated Denmark’s consistent support for and contribution to the process of peacefully resolving the North Korean nuclear issue and establishing peace on the Korean Peninsula. The two leaders shared the view that the denuclearization must be achieved in a complete, verifiable and irreversible manner,” the statement said.

Moon met with Queen Margrethe II of Denmark on Saturday and discussed ways to improve the countries’ bilateral ties and economic cooperation.