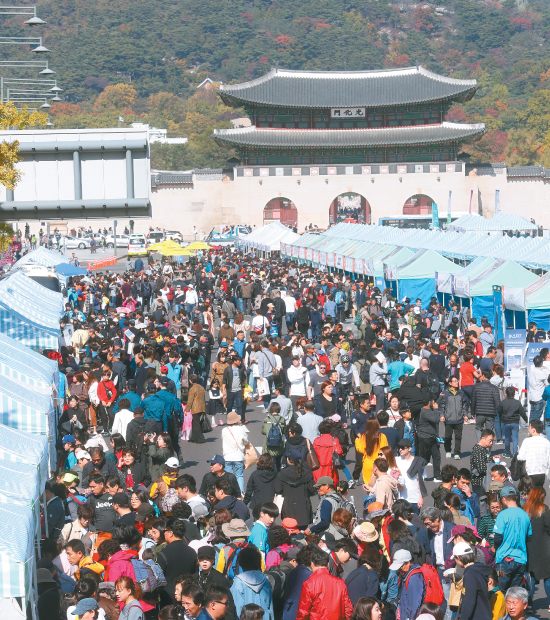 Spending for a good cause - Crowds enjoy the JoongAng Ilbo’s 14th annual WeAJa charity flea market Sunday in Gwanghwamun Square, central Seoul. The event was simultaneously held in Busan, Daegu and Daejeon. Some 385,000 people were tallied across all four locations. Proceeds will be donated to We Start and the Beautiful Store Foundation to help children from low-income families obtain education. [CHOI JEONG-DONG]

Hundreds of thousands of people participated in the 14th annual WeAJa charity flea market in Seoul, Busan, Daegu and Daejeon on Sunday, purchasing secondhand goods, participating in auctions of items donated by high-profile figures from all walks of life and enjoying entertainment and food on the sidelines.

The proceeds from the four flea markets will be donated to We Start and the Beautiful Store Foundation to help children from low-income families obtain education; this year’s figure was not available as of press time. Since kicking off in 2005, the WeAJa charity, hosted by the JoongAng Ilbo, has raised some 1.7 billion won ($1.5 million) in total up to last year.

A white rosary donated by first lady Kim Jung-sook, which she was said to have received from an acquaintance, sold for 4.4 million won in the Seoul auction, the highest amount in all four cities. A blue necktie President Moon Jae-in wore last week in Rome at St. Peter’s Basilica during a special mass for peace on the Korean Peninsula sold for 3.4 million won.

A pair of Reebok sneakers with the signatures of all seven members of iKON sold for 110,000 won.

Lotte Giants player Lee Dae-ho’s cap and gloves were sold for 100,000 won, while a tea set donated by Kim Ji-wan, chairman and CEO of BNK Financial Group, went for 105,000 won.

In Daegu, a bag donated by fashion designer Park Dong-joon, co-head of the Daegu and North Gyeongsang headquarters of the Beautiful Store Foundation, received the highest bid of 500,000 won. Jeong Ho-young, 39, from Gumi, North Gyeongsang, bid 1.2 million won in total on 12 items auctioned, including a sculpture donated by Daegu Educational Governor Kang Eun-hee.

In Daejeon, 16-year-old Cho Ah-hyeon said she was glad to sell the pink rollerblades she received as a gift four years ago to a younger girl for 1,000 won.

“I was going to sell them for 8,000 won, but she liked it so much I decided to give her a huge discount,” said Cho. “I’m glad my skates found a new owner.”

The events were held in Seoul’s Gwanghwamun Square; in Song Sang Hyeon Square in Busan; National Debt Repayment Movement Park in Daegu; and Borame Park in Daejeon. The events were co-hosted by the JoongAng Ilbo, JTBC, and government offices of Seoul, Busan, Daegu and Daejeon.