MMCA director looks back on term: Bartomeu Mari emphasizes continuity and long-term production at the museum

MMCA director looks back on term: Bartomeu Mari emphasizes continuity and long-term production at the museum 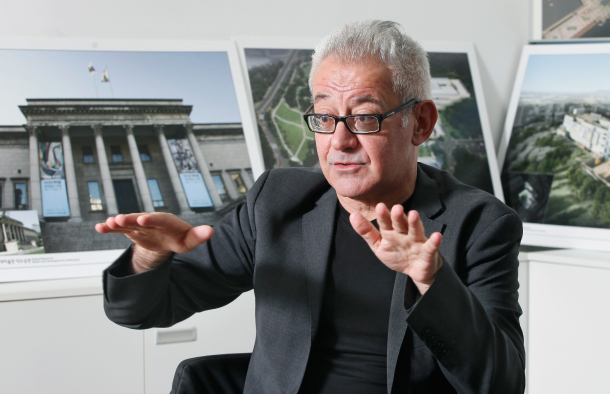 Bartomeu Mari, director of the National Museum of Modern and Contemporary Art (MMCA), during an interview with the Korea JoongAng Daily on Oct. 8. [PARK SANG-MOON]

The National Museum of Modern and Contemporary Art (MMCA) “should be free of political pressures and work as a scientific institution at the service of the Korean society,” Bartomeu Mari, director of the state-run museum, said during a recent interview with the Korea JoongAng Daily (KJD). Throughout the interview he emphasized the museum should be focused on “continuity” and “long-term” research and production, suggesting that MMCA has room to improve.

Last month, he confirmed that his three-year term, which expires in December, will not be extended, a decision made by the Korean government. This is not what the first-ever foreign director of the MMCA was hoping for, as he had openly expressed his willingness to work for another term.

The Korea JoongAng Daily sat down with Mari at MMCA Seoul near Gyeongbok Palace in central Seoul on Oct. 8 for an interview and also exchanged questions and answers by e-mail before and afterwards. The following are edited excerpts from the discussions.

A. I don’t agree with the idea that only Koreans can understand Korean art, especially in the time we live in right now. But I respect the ministry’s choice.

What is specific to Korean art is the way in which it translates the very-compressed transformations of Korean society and culture. Those transformations happened in about 120 years, whereas they took more than 300 years in other countries.

The upcoming [MMCA] exhibition “Art of the Korean Empire” will shed light on the emergence of modern art in Korea, which can be traced prior to the Japanese [colonial rule] (1910-45). It’s another type of modern art [which had not been studied in earnest before]. Now we are beginning to explain it. The museum is set in the right way.

What do you think is your greatest achievement as the director of the MMCA?

The life of this museum has been very hectic in the past 10 years. Few previous directors served for more than three years, and my two immediate predecessors could not finish their three year mandate.

I hope I brought an atmosphere of stability, continuity and long-term research and production as a condition to a successful public museum. The identity of the MMCA should be built with scientific criteria and vision about its role in Korean culture, and also in the global context.

In spite of lack of time, we showed the museum can work at a top global level, producing complex exhibitions. Some of the upcoming exhibitions like “Civilization” [an international photography exhibition that started on Thursday], “Art of the Korean Empire,” “The Essential Duchamp” or “Awakenings: Art and Society in Asia 1960s-1990s,” are good examples.

Before you took this job, you had not been involved in many East Asian art institutions. How much do you think your knowledge of Korean and Asian art has grown?

I feel that I am now a specialist in Korean modern and contemporary art. I still have a lot to discover and experience, but I have been an avid and fast learner. I am now very well prepared to explain Korean art in the global context, without pretending to have an encyclopedic knowledge. Knowledge is not a list of names and dates: knowledge is a structure of critical ideas that can bring objective arguments about the quality and significance of what Korean artists do.

Curators are not historians: we use very interdisciplinary methodologies and grammars, with and without language, with space, images and sounds, with printed matter and digital media.

How has the MMCA’s collection changed during your term? In an interview with the KJD in 2016, you talked about the possibilities of acquiring works by foreign artists related to internationally-active Korean artists to construct a narrative of Korean art in the global context. Has that idea been realized?

A museum collection is the product of a long process and it was not possible to accomplish this particular objective. Relevant acquisitions have been made, yet they do not suppose any qualitative change in the MMCA collections.

When I arrived here, I saw the focus of the collection was changing every year, without any logic. And the acquisition procedures were opaque. In the last months, we succeeded in implementing a long-term collecting policy, based on research and planning, and we established new, transparent acquisition procedures that should last.

Can you explain the collection policy in more detail?

I proposed to make an analysis of the MMCA collection, identifying its strengths and weak points. Curators should research the areas that are considered to be weak points and they should find artworks to fill the holes.

For example, our collection of photography is not strong. Photography and modern art go hand in hand. I am sure that Korea has a very important modern photographic heritage, but we don’t have it, so we have to find it. Such collections have to be made very slowly, with long-term research. I know this is not how it used to be done in Korea. But this is what a public museum has to do.

You said in the recent parliamentary audit hearing that the museum would conduct a thorough investigation into its collection, after the discovery of the fake Rhee Seundja painting. Is it possible to investigate each of more than 8,000 works?

Since I became aware of the issue at the end of 2017, I instructed [that we] perform thorough research on all works on which suspicion of being fake was ever projected by anyone external to the MMCA. The case of Rhee Seundja’s work was solid.

Yet we decided to identify the works that had not been directly acquired from artists or artists’ direct families, to trace their origins and discard any possibility of being fake. There are about one thousand works in this condition and the museum continues [to] perform research on the origin of each. It is a very laborious task. Whenever there are conclusions to these investigations, we will be able to share them. So the answer is, “We’ll do our best.”

What do you have to say about publishing projects and exhibition exchange projects during your term?

In three years, we have brought major institutions to talk with us about exhibition and publications projects. I wish that I would have initiated more projects with different Korean institutions. The exhibitions “Awakenings…”, to open in 2019, is a good example of the need to have institutional partners of quality in Asia, with the Museum of Modern Art, Tokyo and the National Gallery of Singapore, among others. I hope that before I cease in my functions, the MMCA can announce that negotiations have been successfully concluded and contracts for major exhibitions and publishing projects have been signed.

Many artists and outside experts who worked with the MMCA complain about the state-run museum’s inflexible and bureaucratic culture. Is this problem common in state-run museums worldwide or unique to Korea?

If such an ‘inflexible and bureaucratic culture’ exists, it may be the result of the many years the staff of the museum has suffered from the tensions of the intellectual partisanship between two universities. (Seoul National University and Hongik University have long been considered the nation’s top art colleges.)

This problem is unique to Korea. I have informed the Culture Ministry and the three different Ministers in the past three years about my diagnosis and solutions for the museum, with rapidity, precision and clarity. Many things must still improve at MMCA: its culture, the deeply rooted habits, some structural dysfunction … French and British bureaucracies are also very heavy yet they don’t translate in the museum culture.

When I arrived here in late 2015, I saw the staff of the museum was organized in a territorial way; one group of the staff was identified with the MMCA Seoul and the other identified with the MMCA Gwacheon. That was producing a very tense situation, as the contracts of the two groups were different. I felt it was a bad situation. Since we could not change the contract types, we at least mixed the teams. It worked quite well. We didn’t solve the problem totally but it improved a lot.

But I could not change the contract bases. This is something that I don’t know who can change; it doesn’t depend on even the Culture Ministry. (Contracts are related to the Ministry of Interior and Safety and other agencies.) Among the two types of contracts, one is a life-long term and the other is a very short-term base. This is discriminatory. I hope the next director will be allowed to solve the problem.

Do you think the incorporation of MMCA, which was proposed long ago by a former administration but was finally nullified by the government this year, could have solved the problem?

In my opinion, nobody has been able to explain what exactly incorporation is. So there was big confusion. I had my own idea about what it means because nearly all museums in Europe are incorporated. But I don’t know what it means in Korea. I know incorporation is a big phantom here; everybody is afraid of it. I don’t think it’s very popular in Korea.

As a foreigner working in the Korean art world, have you discovered any big difference, whether good or bad, in the general art world of Korea from those of other countries?

I am now the most Asian, the most Korean of the European museum directors. The Korean art system is very similar to any other art system in the world that I know: it needs to be stronger in the production of critical ideas about art, and it must boost its international interaction.

Contrary to the Japanese audience, which is more interested in heritage, I feel Korean society enjoys new art, and this means that the MMCA can play a greater role. The best thing about Korean art is that there are many extraordinarily good artists in all the different generations and genres, and this makes it one of the most attractive scenes.

Do you have any advice about the future of Korean contemporary art and the related roles of the art world players?

I can only give advice on what I know: public museums. The MMCA’s governance, its organizational structure and the staff’s acquisition of new skills are the key to a solid and stable improvement. The MMCA must not stop becoming a leading world-class museum. The museum must be operated in a talent-based, result-oriented system, with efficiency and transparency. And, most important, the museum should be free of political pressures and work as a scientific institution at the service of the Korean society.