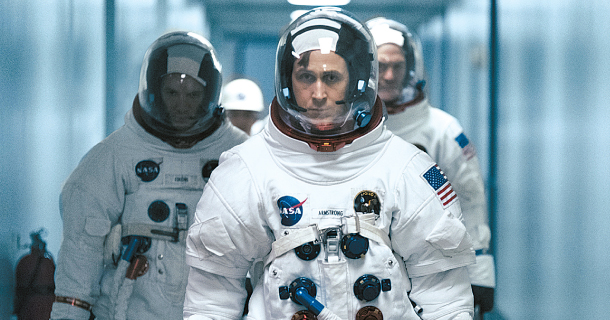 The second collaboration between the “La La Land” director and actor Ryan Gosling, “First Man” sold 350,000 tickets at 1,190 screens from Friday to Sunday, according to data provided by the Korean Film Council on Monday. Since its release on Thursday, the movie has sold a total of 423,000 admissions, with total sales nearing 3.3 billion won ($2.9 million).

Based on James R. Hansen’s book “First Man: The Life of Neil A. Armstrong,” the biopic tells the story of the first man on the moon. The film chronicles Armstrong’s work with NASA and also explores how society benefits from individuals who put their work over personal happiness. Instead of building up the moment where an American flag is planted on the surface of the moon, the movie instead sheds light on how Armstrong was partially motivated by his unspoken grief over the death of his young daughter, and how he escaped his role as a patriarch by working with NASA.

Coming in at second and third were local thriller “Dark Figure of Crime” and Hollywood anti-hero flick “Venom.”

“Dark Figure of Crime,” which depicts a psychological confrontation between a detective and a prisoner who confesses to committing more murders than he was charged for, sold 312,000 tickets over the weekend, bringing its total sales to 3.4 million tickets. “Venom,” starring Tom Hardy, sold 242,000 admissions in the same period. The latest Marvel entry is fast approaching 3.7 million in ticket sales.

Local drama “Miss Baek” followed, coming in at fourth, with 144,000 admissions sold in its second weekend. The film explores child abuse through the eyes of Sang-ah (Han Ji-min), a social outcast who was abandoned by her abusive mother in her youth and became a convict as a minor after trying to protect herself from a potential rape. On Monday, she was named Best Actress at the Korean Association of Film Critics Awards for her role in the film.

“A Star is Born,” Bradley Cooper’s directorial debut starring himself and Lady Gaga, rounded out the top five, with its total ticket sales reaching nearly 270,000 in its second weekend. 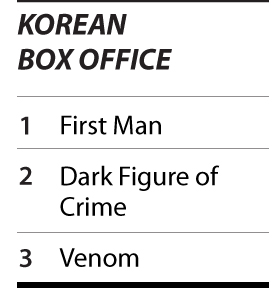 The newly released “Too Hot to Die” finished the weekend eighth at the box office, with 19,400 tickets sold. Starring Jung Sang-hoon, Kim In-kwon and Son Dam-bi, the movie is about a group of people who try to complete their bucket lists before they end their lives.