A farewell to polar bears

A farewell to polar bears 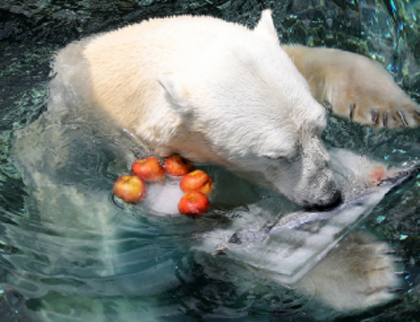 The first record of raising a polar bear was in England in 1253. King Henry III kept a polar bear on a chain. The polar bear was sometimes released on the banks of the Thames. Norwegian and Icelandic traders were said to have captured polar bears and sold them to the royal and aristocratic families in Europe, so it must have been one of those cases.

In Korea, polar bears were first introduced at the Changgyeongwon Zoo in 1955, a male and a female from the Netherlands. Unfortunately, they died soon because of bad feeds. In the next year, the zoo brought another pair from the Netherlands, and the couple had two babies four years later at Christmas.

More zoos opened in the 1970s, and many brought in polar bears. There were as many as 20 polar bears in zoos in Korea. They were very popular, as visitors adored the cute and friendly animals. However, the polar bears nodded their heads not because they were friendly but because they were stressed. Because of the hot weather, they suffered from frequent skin diseases.

Zoos in Europe decided not to have polar bears. In Korea, people started to think that it was abusive to keep polar bears in countries with hot summers. At last, Korean zoos no longer bring in polar bears. As polar bears died one after another, the number decreased, and on October 17, the last polar bear in Korea, Tongki in Everland, died. He was born 23 years ago in Dotseom Zoo in Changwon in 1995, and he lived closed to the average lifespan of 25 years.

Polar bears are the biggest contributors to change in zoos not only in Korea but around the world. Animal rights activists who sympathize with the pains of the polar bears in zoos make extreme claims to get rid of zoos all together. Progressive zoos have changed the concept from showcasing animals to a place to preserve biological diversity and enhance awareness to respect lives. The internal environments have been changed to resemble nature as much as possible. When it is impossible to create a nature-like environment for certain animals, as in the case with polar bears, they should not be brought in.

Korea is starting to see these changes, but implementing them is not easy. When zoos ask to expand budgets for animal welfare, local governments often respond that they don’t have enough budget for the residents. But a country with more than $30,000 in per-capita national income should not neglect animal welfare. Citizens who heard the news of Tongki must have imagined a world where both people and animals are happy.