Hydrogen bus on road in Ulsan

Hydrogen bus on road in Ulsan 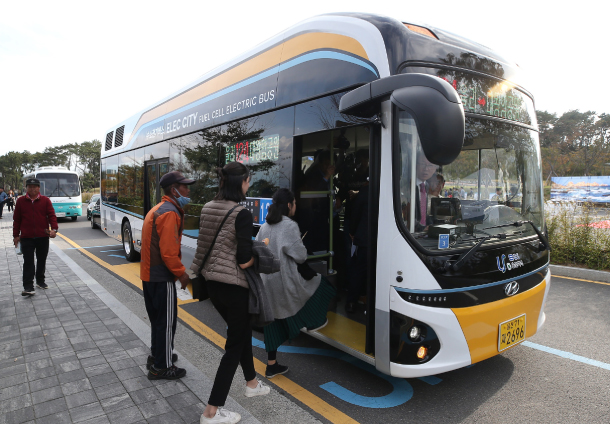 Citizens get on a hydrogen-powered intracity bus near Daewangam Park, in Ulsan’s Dong District, on Monday. [YONHAP]

According to the automaker, it is the first time a fuel-cell powered bus was used for public transport on a regular route in Korea. The move is in line with the country’s push to reduce car emissions.

Fuel-cell vehicles are said to be the “ultimate eco-friendly” transportation device because their emissions are water, which means they have no direct harm to the environment.

The No. 124 fuel-cell powered bus will operate twice a day on a 56-kilometer (34-mile) round-trip route around Daewangam Park, Dong District, in Ulsan. The bus will charge at a hydrogen refill station in Ok-dong, Nam District, Ulsan.

The vehicle is based on Hyundai’s third-generation fuel-cell powered bus, the same model introduced on a trial basis during the PyeongChang Winter Olympics held in February.

The pilot operation is based on a memorandum of understanding signed between the Ministry of Trade, Industry and Energy, the Ulsan government, Ulsan’s public transport authority and Hyundai Motor.

Ulsan, where Hyundai Motor’s largest local plant is located, has been working to get noticed for its leadership in adopting hydrogen cars and relevant infrastructure.

In May, the city announced it will replace all intracity buses with fuel-cell buses by 2035.

To accelerate the transformation, the Ulsan government signed an memorandum of understanding on Monday with nine companies working on fuel-cell technologies and the Korea Hydrogen Industry Association. They will jointly set up an ecosystem for hydrogen transportation-related businesses.

Apart from fuel-cell buses, the companies and the association are hoping to power other vehicles, such as trucks, ships and forklifts, with hydrogen. They also plan to make joint investments to produce 30,000 fuel-cell cars in the country per year.

Hyundai Motor is currently focusing on launching a new generation of fuel-cell buses by 2020, with longer driving distances per charge and enhanced stability.

“We will keep expanding our fuel-cell bus lineup,” a spokesperson from Hyundai said.

The U.S. Department of Energy has been sponsoring pilot projects for fuel-cell transit buses with 26 companies, while the European Union has been running a program dubbed the Joint Initiative for Hydrogen Vehicles across Europe to validate the performance of buses on the continent.

In March, Toyota introduced the Sora, its first fuel-cell bus to receive certification in Japan. The company is expected to introduce over 100 hydrogen-powered buses, mainly within the Tokyo metropolitan area, ahead of the Tokyo Summer Olympics in 2020.

According to consulting firm McKinsey, a total of 5 million hydrogen-fueled buses will operate globally by 2050.