KDB’s Lee says payment to GM could be halted

KDB’s Lee says payment to GM could be halted 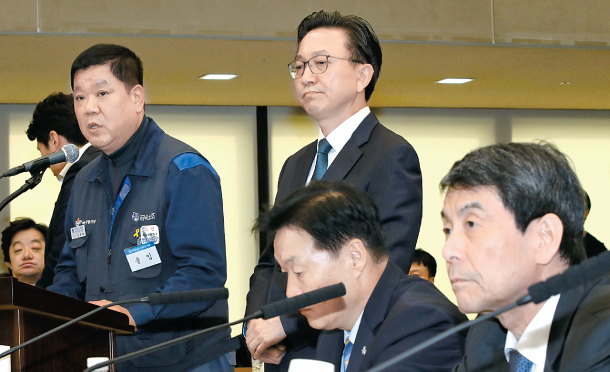 Korea Development Bank (KDB) Chairman Lee Dong-gull Monday told lawmakers that it may not follow through with an agreement to inject $375 million in GM Korea by the end of this year if there’s a strong national protest against it.

However, he warned that breaking the agreement could result in GM pulling out of Korea instead of fulfilling its promise to remain for at least 10 years.

“Would [breaking the agreement] be appropriate?” Lee asked rhetorically during a National Assembly annual audit. “It is only when we pay the remaining $375 million agreed to in the contract that GM is obligated to maintain and invest in facilities for the next 10 years.”

The head of the state-owned bank, which is the second-largest shareholder in GM Korea with a 17.2 percent stake, was questioned by lawmakers over GM Korea’s decision Friday to spin off its R&D unit as a separate company. The KDB said it failed to attend the shareholders’ meeting that voted on the decision because it was physically blocked by union protesters.

Lee told lawmakers he wasn’t absolutely against GM Korea’s decision to spin off the R&D unit, adding that trying to predict whether such a move is good or bad was pointless and that it could actually be beneficial.

GM Korea’s union claims the spinoff is the first step in a long-term plan to completely halt domestic production.

“There are many cases overseas where R&D is spun off yet production continues,” Lee said. “What’s important is that GM maintains and invests in production facilities for the next 10 years as it has promised.”

Lee also denied claims that GM has the potential to pack up and leave Korea after profiting from the public funds it has received from the Korean government.

“It’s hard for me to be convinced on how the labor union came up with the conclusion that GM will, after 10 years, commit an ‘eat-and-run,’” the KDB chairman said. “If we suffer a loss of 800 billion won [$708 million] in investments we made in GM Korea [through GM’s eat-and-run], GM will suffer a loss of 4 to 5 trillion won.”

On an injunction that the bank sought earlier against the shareholders’ meeting on Friday, which was denied by an Incheon court, Lee said the injunction wasn’t against the idea of spinning off the company but rather GM’s failure to properly give a detailed explanation of the spinoff.

“It wasn’t a judgment on whether the split off was good or bad,” Lee said. “Our demand was that GM turns over its business plans [on the newly-establishing R&D and design company].”

When asked when he knew about the spinoff, Lee said he was aware of it when the negotiation in April was concluded.

“But we refused to put it [in the contract] as we thought it wasn’t an issue for discussion,” Lee said.

“In reality, it is not easy to put all potential situations [in the contract].”

Lee had some advice for GM Korea’s labor union.

“Instead of habitually holding strikes, it would be better if GM Korea’s union engages in productive negotiations,” Lee said.

He said the bank is currently reviewing taking legal action against the union for preventing KDB representatives from participating in the Friday shareholders’ meeting.

He also said the government should be focused on how to keep the Korean automotive industry sound.

GM Korea’s decision during its shareholders’ meeting on Friday has raised controversy.

Incheon Mayor Park Nam-chun on Sunday posted on Facebook that he has ordered his employees to look into the legality of kicking GM Korea out of a test driving site that Incheon has allowed it to use for free. The Incheon government has been leasing the 410,000-square-meter (101-acre) area to GM Korea for test driving at no cost since 2004.

To prevent a closure of its auto factories and massive layoffs, the Korean government agreed with the U.S. automaker in April to finance $750 million of $7.15 billion in investments to be made in GM Korea. KDB paid half in June. GM promised to cover $6.4 billion. Under the agreement, GM has agreed not to pull out of the country for the next 10 years.

The crisis seemed to have settled with the agreement, but it reignited in July.