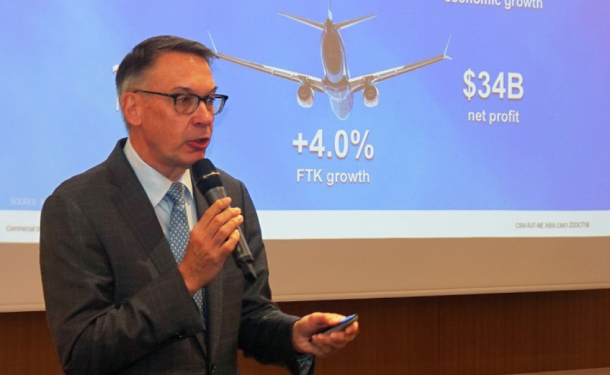 According to the U.S. aircraft maker, Korea has become the largest low-cost carrier (LCC) market in the company’s Northeast Asia region, which encompasses Korea, Japan and Taiwan, with the number of seats offered by LCCs growing at an average 31 percent a year for the past five years.

The strong growth was largely the result of the opening of new routes. More than 70 percent of new flight routes in Northeast Asia have been established by Korean LCCs over the past three years, Boeing said.

With LCCs powering growth in Korea, Tinseth added that traffic growth in Northeast Asia will increase by two percent annually over the next 20 years. He forecast that the growth will generate the need for 1,450 new airplanes worth $310 billion.

There are currently six LCCs in Korea actively expanding their fleets, and more entrants are preparing to start operations despite concerns the market is already saturated.

When asked if new LCC entrants are still necessary in Korea, Tinseth said, “There’s opportunity for new airlines,” considering fast-growing outbound travel in Korea. The number of Koreans traveling abroad has been growing at double-digit rates over the last three years, according to Boeing, and part of that demand comes from increased capacity and lower flight costs due to competition.

According to Tinseth, the passengers win in the end as increased competition results in better quality services at lower costs.

Boeing also projects 69 percent of all new deliveries to Northeast Asia will be to replace older and less efficient airplanes over the next 20 years.

“Due to the maturity of the market environment here in Northeast Asia and especially in Korea, a much higher percentage of new airplanes will be used for replacement,” Tinseth said.

Globally, Boeing projects airlines will invest $6.3 trillion for more than 42,700 new commercial airplanes over the next 20 years.