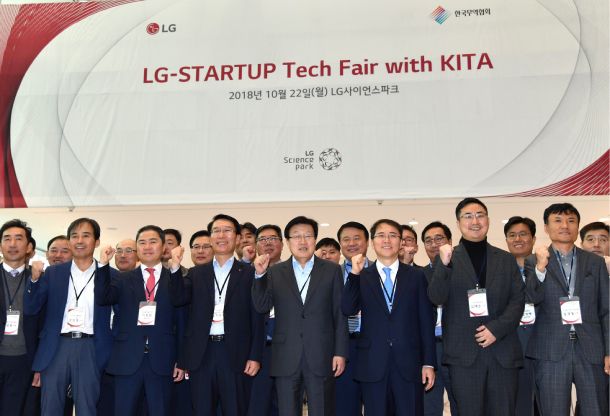 Participants at the LG-STARTUP Tech Fair with Korea International Trade Association pose for a photo on Monday at the LG Science Park in Gangseo District, western Seoul. [YONHAP]

Technology-related subsidiaries of LG hosted a fair on Monday in which 20 local start-ups presented their cutting-edge developments in areas such as autopilot technologies, artificial intelligence and big data.

The small firms are seeking partnerships with and support from the fourth-largest conglomerate in Korea.

The conglomerate is providing a venue for the fledgling firms to mingle with their larger counterparts and find new business opportunities.

Executives and researchers from those companies as well as KITA CEO Kim Young-ju paid a visit to the start-up fair, which took place at the LG Science Park in Magok, western Seoul, and had a closer look at technologies and services featured.

Funnel, for instance, has developed a voice-recognition system that automatically collects information from television broadcasts. The resulting database can be used for artificial-intelligence smart speakers and voice-command chat bots.

Venta VR owns a technology that is able to tape high-resolution 3D videos and calibrate the video images afterwards in a way that enhances the level of immersion and minimizes visual fatigue.

LG will offer some of the participating start-ups office and research space inside the LG Science Park as well as technology-related consulting and funds.

Companies under the LG umbrella have been increasing support for start-ups.

LG Electronics is backing four start-ups that are in the web operating system business, whereas LG CNS and LG Display have been running their own programs.

LG-led tech fairs aimed at locating and supporting promising local start-ups have been held in the United States, Germany, Israel and Russia.

With a German start-up discovered during a tech fair in Europe, LG developed a linear compressor technology for refrigerators.

LG says it will apply the cooperation system it developed overseas to Korean start-ups and smaller companies.

“Future cooperation with start-ups will propel their global outreach,” said an executive at the LG Science Park.