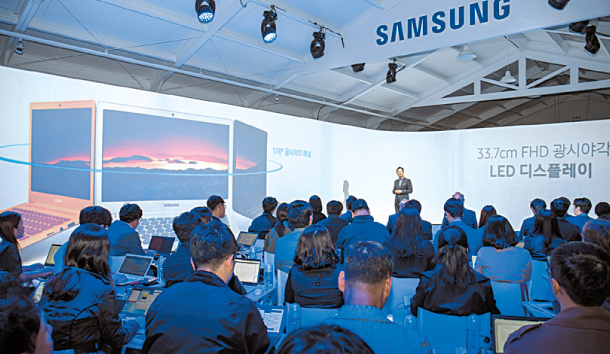 Samsung Electronics introduced on Monday a laptop it believes will appeal to millennials.

The new device is based on the Windows 10 operating system.

“We worked with Samsung Design Europe to come up with a refined European model that millennials would want,” said Lee Min-chul, managing director of the company’s PC business unit at a launch event in northern Seoul on Monday.

It is powered by Intel’s latest gigabit WiFi chip, rated for download speeds of up to 1.7 gigabytes per second - a speed that Lee says is currently the fastest.

Fingerprint login capabilities and a secret folder, in which the user can save important files, contribute to a high level of security.

But at 1.37 kilograms (three pounds), the new device is relatively heavy, weighing much more than typical one kilogram ultra-light laptops.

For Samsung, a top global vendor of smartphones, semiconductors and TVs, laptops are a weak spot.

The tech giant ranks behind the six largest players - HP, Lenovo, Dell, Apple, Asus and Acer. Those six have about 89 percent of the global market, according to TrendForce in a February report.

Samsung, LG and others make up the remaining 11 percent.

Samsung currently retails laptops only in Korea, the United States, China and Brazil. A full 45 percent of all laptops sold globally are sold in these markets.

Samsung’s annual shipment of laptops totals about 3.2 million units, according to the company.

The target for Flash laptop sales in the four target markets is one million units.

Despite its minimal global presence, Samsung is committed to the laptop business, said Lee, citing the device’s “connectivity” with other devices.

“PCs are central when it comes to IT devices they support - such as monitors, printers and even mobile phones,” Lee said.

Laptops have been evolving in different ways in recent years, and Samsung wants to develop hybrid products, including laptops with foldable displays.

“But it’s not only about hardware. It’s important to provide new usability,” he added.

But a model specifically designed for wireless operator KT can be purchased for 8,000 won per month on a 36-month subscription with KT’s internet service and the Olleh internet protocol TV.