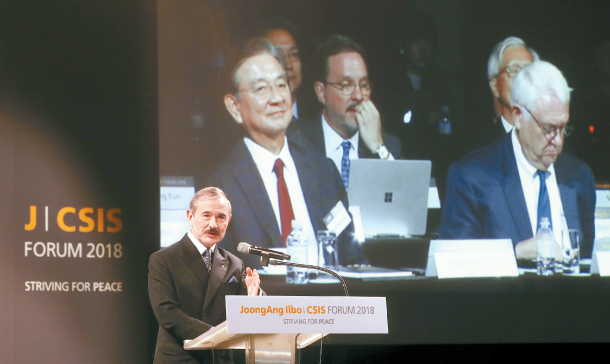 Harris, in an address at JoongAng Ilbo-CSIS Forum 2018 in Seoul Monday, talked about the U.S. secretary of state’s fourth visit to Pyongyang on Oct. 7 to meet with Kim to discuss the implementation of the North Korea-U.S. joint statement of June 12 in Singapore.

“Chairman Kim agreed to allow inspectors to visit the Punggye-ri nuclear test site and Tongchang-ri missile engine test site,” said Harris, “and hinted at the possible opening of other facilities even more central to North Korea’s missile and nuclear processing capabilities.” This could include the Yongbyon nuclear complex or facilities related to the North’s intercontinental ballistic missile (ICBM) transporter erector launchers (TEL).

He noted that Kim and Pompeo instructed their “working level teams to meet soon to intensify discussions on denuclearization,” though the meeting has yet to happen.

This year’s forum, organized by the JoongAng Ilbo and Washington-based think tank the Center for Strategic and International Studies (CSIS), and in its eight iteration, held the theme of “Striving for Peace,” following three inter-Korean summits and the first-ever North-U.S. summit this year. The forum was held at the Westin Chosun Hotel in central Seoul.

The top diplomat to Seoul underscored the advancing of inter-Korean relations must remain linked to the issue of the North’s denuclearization.

“We are, of course, cognizant of the priority [South Korean] President Moon [Jae-in], and his administration, has placed on improving South-North relations,” said Harris. “I believe - and as President Moon has said - this inter-Korean dialogue must remain linked to progress on denuclearization. Only in this way will the prospects of achieving our common goals with the North be their greatest.”

On the same day as meeting with Kim, Pompeo traveled to Seoul and briefed President Moon and Foreign Minister Kang Kyung-wha on his Pyongyang trip.

“In doing so, Secretary Pompeo became the first secretary of state to meet with leaders of the two Koreas on the same day,” said Harris. “We regard this as a tangible symbol of our commitment to achieve the final, fully verified denuclearization (FFVD) of the DPRK, in close coordination with our ally, the Republic of Korea.” DPRK refers to the North’s official name, the Democratic People’s Republic of Korea.

Harris added, “There remains a lot to be done for sure. But I believe that if the United States and South Korea continue to approach North Korea with a common voice, then we can turn the commitments that were made in Panmunjom, Pyongyang and Singapore into reality.”

In addition to the strength of the security alliance, Harris highlighted trade and investment relations, cultural ties and shared values. However, Harris hinted that ongoing negotiations on a multiyear, cost-sharing agreement over the stationing of U.S. troops on the Korean Peninsula could put a damper on denuclearization talks. Seoul and Washington concluded their latest round of talks Friday without bridging their differences though the current Special Measures Agreement (SMA) is set to expire at the end of year.

“President Trump has emphasized the value that the United States places on our alliance and insists that both governments work to achieve a fair agreement,” said Harris. “It’s in both of our countries’ interest to conclude this negotiation quickly, so that through our iron clad alliance, we can now focus on the important task of working hand in hand to achieve the denuclearization of North.”

Hong Seok-hyun, chairman of JoongAng Holdings and the Korea Peace Foundation, said that North Korean leader Kim “must play a time game” and “produce tangible results while he has the trust and attention of the golden combination,” referring to Presidents Moon and Trump.

“If he misses this golden opportunity, I believe he will end up with the greatest regret,” said Hong in his opening remarks, urging Kim to “back up his words with actions.”

“Chairman Kim is at an important crossroads, and one of the cards we can use to instill courage in him is to present a clear idea of the economic benefits of denuclearizing,” said Hong. He pointed out that while Kim “may feel uneasy without a nuclear program, if the economy fails, it will mean a certain end for him.”

Hong said South Korea, the United States and the international community “should devise and present a plan for economic benefits and detailed ways to realize those benefits through North Korea’s denuclearization.” He continued, “The fate of the Korean Peninsula lies in how South Korea and the United States reach common ground on the North Korean economy, which has become the fate of Chairman Kim himself.”

The forum covered the topics of achieving denuclearization and peace diplomacy; reforms in North Korea and economic prospects for the Korean Peninsula; strengthening the U.S.-Republic of Korea (ROK) alliance; and economics and policy considerations.

There is “clearly is a gap” in understanding between Seoul and Washington, said Victor Cha, senior adviser and Korea chair at the CSIS, adding, “We have to coordinate better, and we have to address in that coordination the question of whether the goal that we’re trying to achieve is peace and reconciliation or denuclearization.”

He noted that the South is saying that some sort of peace agreement is necessary to get to denuclearization but that many in the Washington may think “exactly the opposite.”

“Americans are not against peace,” said Cha. “But we don’t want peace for a bad denuclearization deal.” He elaborated that a good deal would include three components: a comprehensive declaration of nuclear weapons and facilities, verification by an outside body, such as the International Atomic Energy Agency (IAEA) and a timeline for dismantlement. But while what has been offered by North Korean “falls short of that,” said Cha, “there still are things that can be worked with.”

Lippert said there is a misconceptions that if “you’re for denuclearization you’re against peace,” and vice versa. “There is growing momentum around those binary positions that we have to watch,” he said, adding, “It is possible to manage both” through making tactical choices and priorities, in which “Seoul and Washington’s coordination is really important.”

In another session, Richard Armitage, president of Armitage International, warned that the South Korea-U.S. alliance is “heading for rough waters.” He pointed to concerns over the inter-Korean military agreement signed at the Pyongyang summit last month, aimed at reducing border tensions, which included removal of guard posts in the demilitarized zone and no fly zones over the military demarcation line.

“As military matters, they’re not so important, but as political matters, they were important because this was done with very little consultation with the United States not only at the eleventh and a half hour, and none of our suggestions were accepted, as I understand it,” said Armitage. Referring to Harris’s address earlier, he continued, “After a 65-year alliance, which some people describe as being forged in blood, we have to talk about having a common voice? I think that is a sign that we have some trouble.”

John Hamre, president and CEO of CSIS, pointed to a dilemma Korea may face amid two emerging competing parallel economic systems over time, on one side a China- or Russia-dominated system, and a Bretton Woods system grounded in rule of law on the other side. He further questioned whether inter-Korean projects, including the East Asian railway community, are economically viable, adding that studies should be going on right now.

“I actually favor an integration of the two Korean economies,” said Hamre. “America wants that. We need a stronger Korea 30 years from now, so that it can be a lead for the Bretton Woods construct in Asia… We need you to be successful and stronger.”