Eric Hacker returns to postseason in some new red threads

Eric Hacker returns to postseason in some new red threads

In March, when the Korea Baseball Organization (KBO) season was under way, right-hander Eric Hacker was at his U.S. home, trying to stay up to date on the league where he’d pitched in the previous five seasons and wondering if he’d get another opportunity to play there at age 35. 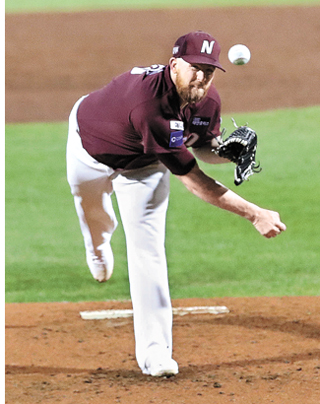 Eric Hacker of the Nexen Heroes throws a pitch during the first postseason game against the Hanwha Eagles on Oct. 19. [NEWS1]

Fast forward to October. Hacker is back in a familiar spot - the KBO postseason. But it has a new twist, as Hacker, formerly of the NC Dinos, is doing so with the Nexen Heroes.

Hacker was not re-signed by the Dinos after the end of last season. He had been with the expansion club since Day 1 in 2013 and went 56-34 with a 3.52 ERA in five seasons. He won a league-high 19 games in 2015 and pitched the Dinos to their first Korean Series appearance in 2016. The Dinos went to every postseason from 2014 to 2017, with Hacker serving as a rotation workhorse.

But after the Dinos cut ties, none of the nine other clubs sought out the veteran despite his track record - at least not immediately.

In the summer, the Heroes came calling, after one of their two foreign starters, Esmil Rogers, came down with a season-ending injury. KBO teams can carry up to two import pitchers, and the Heroes decided to fill their vacant spot with Hacker, who’d been openly seeking a second chance in the KBO through his social media postings.

Hacker now finds himself in the best-of-five first round series against the Hanwha Eagles, with the Heroes taking a 2-1 series lead heading into Tuesday’s Game 4.

The Dinos also played in the first round series a year ago. They knocked out the Lotte Giants before losing in the next round to the Doosan Bears.

“It’s kind of crazy. A year later, here I am, in the exact same position, but with a different team in a different stadium,” Hacker told Yonhap News Agency before Monday’s Game 3. “This is exciting. In March, I was at home, trying to follow the league. As the season moved on, I realized if the opportunity comes to be on a contending team, that’d be great. Here I am, with Nexen.”

In the first round last year, Hacker made two starts and held the Giants to a single run in 13 1/3 innings, as the Dinos prevailed in five games.

In this year’s first round, Hacker tossed 5 1/3 innings in Game 1, giving up one unearned run while striking out seven in the Heroes’ 3-2 win.

Hacker said he pitched in the KBO for so long that he didn’t have to do much to readjust to the league when he came back. And having new teammates who embraced him right away also helped.

“I was able to step right in and not feel like I’d missed a whole a lot,” he said. “The biggest adjustment was being with a new group and creating the chemistry with new teammates and coaching staff. That happened very quickly. These guys were very welcoming, and they had a very loose team atmosphere. The transition was awesome and smooth.”

Knight pitched in the KBO from 2009 to 2014, the last four of those years with the Heroes, and he and Hacker faced each other during Hacker’s early years in the KBO. Hacker said he tried to learn from Knight back in those days, well before they met as the coach and the pitcher.

“When I first got here, I was trying to make adjustments to the league, but I had a slow start, and I wanted to learn how to pitch in Korea,” Hacker said. “One of the guys I watched a lot of film on was Brandon. I studied the way he was pitching in Korea. I learned from him.”