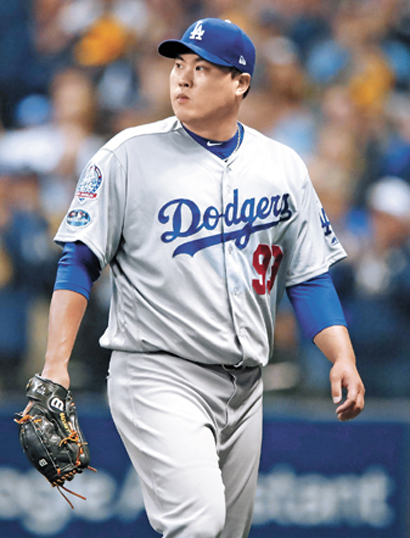 Ryu Hyun-jin of the Los Angeles Dodgers during the National League Championship Series Game 6 against the Milwaukee Brewers at Miller Park in Milwaukee, Wisconsin, on Oct. 19. [YONHAP]

Ryu Hyun-jin of the Los Angeles Dodgers is about to become the first Korean pitcher to ever start in a World Series game.

Ryu will start in Game 2 of the World Series between the Dodgers and the Boston Red Sox. The game, which will be played at 8:09 p.m. Wednesday, local time, at Fenway Park in Boston, will be televised live in Korea at 9:09 a.m. Thursday morning.

Dodgers manager Dave Roberts announced on Monday that Clayton Kershaw will start Game 1 of the World Series while Ryu and Walker Buehler will start the second and third games.

Ryu will be making his World Series debut and pitching at Fenway Park for the first time in his career. In fact, Ryu has only ever pitched against the Red Sox once, during his rookie season in the majors on Aug. 23, 2013. At the time, Ryu picked up a loss by giving up four runs and five hits in five innings.

“With Hyun-jin, he’s been very good at Dodger Stadium,” said Roberts. “But if he’s executing pitches and being on the road, we’re not concerned. He’s had a tremendous year and pitching in big games, whether at home or on the road, it’s not a concern of ours. We just feel that, for him to be able to pitch in two games in the series, he’s had a short one here in Milwaukee, but the rest, he’s on turn.”

This is the second straight year that the Dodgers have advanced to the World Series, but they haven’t taken home the trophy since 1988.

Ryu made his professional debut in the Korean Baseball Organization (KBO) with the Hanwha Eagles. After a dominant KBO career, Ryu signed a six-year $36 million contract with the Dodgers for the 2013 season.

Ryu’s brought in 28 wins in his first season with the Dodgers, becoming the first Korean to be the starting pitcher in an MLB postseason game.

Things took a turn for the worse in 2015 when Ryu struggled to recover from surgery on his left shoulder, something that can often end a baseball player’s career. Since there weren’t many pitchers making successful returns after shoulder surgeries, many doubted that Ryu would ever pitch again. After struggling with an injury for two seasons, Ryu slowly made a comeback in 2017 by picking up five wins and nine losses with a 3.77 ERA. This season, he returned with full force.

Although Ryu had to miss more than three months of the season with a groin injury, he returned with a bang and finished the season with seven wins and three losses with a 1.97 ERA.

In both the regular and postseason games this year, Ryu’s performance has varied greatly on the road and at home. During the regular season, Ryu picked up five wins and two losses with a 1.15 ERA at home, but just two wins and one loss with a 3.58 ERA away.

The trend continued in the postseason. Against the Atlanta Braves at home, during Game 1 of the National League Division Series, Ryu tossed seven scoreless innings. But in two away games against the Milwaukee Braves during the National League Championship Series, Ryu gave up two runs in four and one third of an inning and five runs in three innings, leading him to hit the showers early.

Although Kim Byung-hyun of the Arizona Diamondbacks and Park Chan-ho of the Philadelphia Phillies have made appearances in the World Series, in 2011 and in 2009, respectively, both appeared in the bullpen.

This season, the Red Sox have won 108 games, the most in the MLB.

Game 1 of the World Series will start at Fenway Park in Boston, Massachusetts, Tuesday night and will be aired live Wednesday morning in Korea.