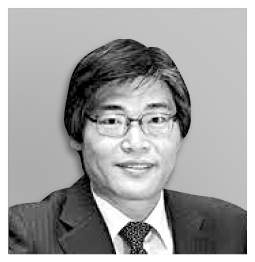 He recently published a book based on his experiences entitled “Super Gap.” In the book, he named three virtues of a leader — integrity, humility and no greed. He describes integrity as the ability to make objective judgments and be frank in discussions regardless of one’s own position. He defines humility as readiness to learn from anyone and being courteous to others. No greed refers to the attitude of not choosing unlawful means or expediency for personal interests. Other virtues like insight, determination, execution and perseverance could be acquired through training, but he thinks that people are born with internal values like integrity, humility and lack of greed to a large degree.

He values modesty and courtesy when hiring employees. Since it is very hard to choose talented employees, he uses a method of weeding out people. The first group he excludes are the arrogant and rude people. They are bound to ruin an organization if they join the company and be promoted, so he excludes them from the candidate pool.

In the days when Korean middle and high schools had entrance exams to select students, Kwon failed in admissions to the most prestigious middle and high schools. While he graduated from the top university for undergraduate, master’s and Ph.D. degrees, the two failures left a major wound. After he joined Samsung Electronics, he spent eight years under a young boss who was promoted faster than him. But he says these experiences helped him find his limits and grow accustomed to failure. If he went to the top middle and high schools that he initially wanted, he might have become arrogant early on and would have lived a different life.

Frankly, I expected a huge secret to leadership that enabled unmatched differences, or a super gap. But the secrets that Kwon revealed are disappointingly mundane. He claims that an organization will succeed if a man of integrity, humility and no greed becomes the leader and modest and courteous people are entrusted to do their jobs. He is basically saying that Samsung’s success in the semiconductor sector is the result of pursuing common sense and common decency.

Kwon says that after time passes, “The leader that people say, ‘We are better off because he made that decision back then’ is the great leader.” He stressed that the attitude to finish everything within the term is dangerous. If the leader shows such an attitude, all members will focus on short-term outcomes. A true leader looks far ahead and prepares for the future.

For-profit companies and the government cannot be the same. But both fall behind if they don’t prepare for the future and take chances constantly. Leaders should have their feet on the ground and eyes on the horizon. Otherwise, they would end up like caterpillars that fail to become butterflies and are caught by other insects.

An ideal organization that Kwon described does not exist in reality. But it is a leader’s job to put in all the efforts needed to become closer to the ideal. It applies to companies and countries alike. When Korea has more qualified leaders, it will become a better country.