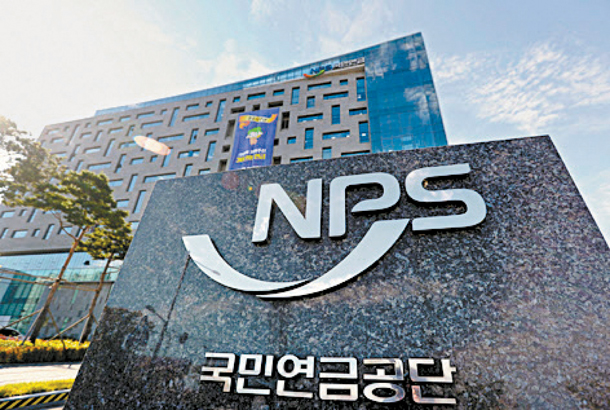 The National Pension Service headquarters in Jeonju. The government body announced on Tuesday it would no longer lend shares it owns. [JOONGANG ILBO]

Kim said the service has yet to decide whether the decision will be permanent.

“We will decide whether to engage in share lending again after closely analyzing the correlation between local share lending and short-selling,” the head of the NPS said.

At the audit, held at the NPS headquarters in Jeonju, North Jeolla, lawmakers raised concerns over transactions of this sort as shares lent are often used in short-selling.

Short-selling is a practice in which investors profit by selling shares that they have borrowed and repurchasing them later at a lower price.

The practice has been blamed for increasing uncertainty in the stock market.

“The NPS lends 4.5 trillion won [$3.9 billion] worth of stock every year, which accounts for 0.68 percent of the stocks lent in the local market,” said Kim Sang-hee of the Democratic Party.

According to the Democratic Party, the NPS has lent 24.8 trillion won worth of stock since 2015 and raked in 68.9 billion won in commissions.

“Although NPS share lending is legal, the stock is often lent to investors that practice short-selling, which lowers the value of stocks,” Kim said. “Short-selling when stocks are falling has resulted in high losses for ordinary investors,” lawmaker Kim said.

The lawmaker said that while other public funds, including the Government Employees Pension Service and the Military Personnel Pension, are allowed to lend shares, they don’t engage in the practice.

She said that the public is anxious about NPS share lending practices, especially when there are concerns about the pension drying up around 2056 and 2057. To counter the shortfall, the government may have to raise the premium.

“During a public discussion on the national pension fund in August, there were many requests to prohibit NPS share lending. There are negative comments regarding the practice posted on the Blue House online petition,” Kim said. “If the NPS continues to lend shares, it could lose public confidence.”

“In order to be an institution that the public can trust, and to which they can entrust their savings, the NPS should consider ending share lending,” Chang said.

The NPS in March this year announced that it will no longer provide new share loans on stocks that the financial regulator has designated as sold excessively short.

The move was intended to prevent NPS-owned shares from being used for speculative short-selling.

During the 2017 National Assembly audit hearing, shares lent by the NPS were said to have been used in the short-selling of Hanmi Pharmaceutical in 2016 when the drug company’s stock plummeted 18 percent on a single day.

The NPS has been lending shares in the local market since April 2000 and began overseas share lending in June 2005.