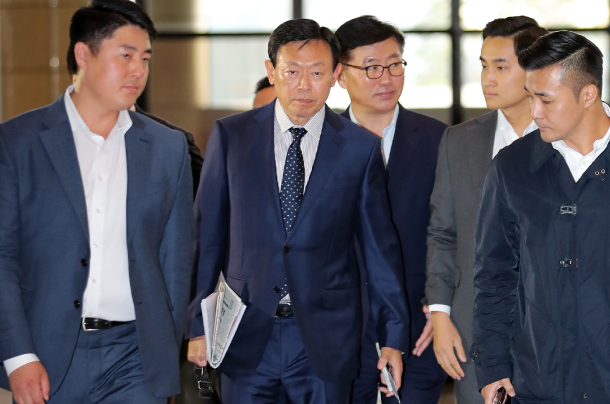 Lotte Group Chairman Shin Dong-bin, second from left, departs for Japan on Tuesday after finishing a meeting earlier that day on a big investment plan. [YONHAP]

“The plan comes in order to normalize management activities, obtain a competitive edge for future growth and contribute to vitalizing the local economy,” Lotte said in a statement.

The announcement comes on the heels of similar plans announced by other conglomerates like LG, Shinsegae and Samsung. Lotte couldn’t join that wave because Chairman Shin Dong-bin was sentenced to 30 months in prison last February for bribing former President Park Geun-hye. On Oct. 5, the Seoul High Court replaced the prison sentence with four years of probation, and Shin returned to work three days later.

Lotte announced an investment plan of 40 trillion won in 2016. But most of the investments couldn’t be executed after the group was badly affected by the deployment of a U.S. antimissile system in Korea in 2017 on a golf course formerly owned by the group and a Chinese boycott against Lotte that followed. Shin’s imprisonment earlier this year also got in the way.

Execution of the 50-trillion-won plan will start next year. A 12 trillion won budget is planned for 2019, a record for the conglomerate.

The two sectors that will receive the greatest attention are chemicals and retail. Some 40 percent of the investments will be in chemicals and 25 percent in retail. Lotte grew to its current size thanks to food and retail, but in recent years, the company has been active in developing the chemical business.

For chemicals, investments will focus on expanding local and overseas manufacturing facilities. The group currently has factories in three locations in Korea, which Lotte said will be expanded.

Investments in overseas facilities will also be made to expand the company’s businesses abroad. Lotte Chemical has a $4-billion project in Indonesia that was put on hold when Shin was jailed. A source at Lotte said, with Shin back in the saddle, resuming the project won’t take long.

The main goal for investments in retail is improving the infrastructure for e-commerce. Lotte said in a statement it plans to establish logistics and computing infrastructure to offer a more convenient experience for shoppers online and off.

Tech development and enhancing the level of digitalization is a long-term goal across the conglomerate’s affiliates. For example, Lotte wants to apply tech to its food business: Artificial intelligence technology is underway to be used for trend analysis and to suggest new products.

Indonesia and Vietnam will be two foreign markets Lotte’s affiliates will focus on. The company once had a huge footprint in China, but Beijing unofficially retaliated against Lotte after the deployment of the antimissile system in Korea. The company added in the statement that it would continue discovering new markets.

The goal for new jobs in 2019 is 13,000, which is 10 percent higher than what Lotte plans to hire this year. Many hires will be in the e-commerce sector.