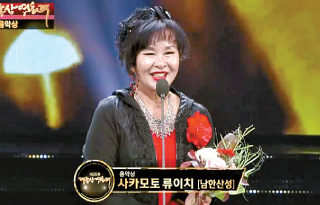 Musician Ryuichi Sakamoto’s award was accepted by singer Han Sa-rang, instead of Kim Ji-yeon, from the production team behind “Fortress.” [NEWS1]

The 55th Daejong Film Awards held Monday evening was a party without stars.

The majority of the honorees, including Na Muni, who was named Best Actress for her role in “I Can Speak” and Hwang Jung-min, who shared the Best Actor award with Lee Sung-min for their roles in “The Spy Gone North,” did not show up at the annual award ceremony that many have deemed unfair in how it chooses its winners. Over the course of the evening, random people without any relation to the winners accepted awards on their behalf.

In the case of esteemed musician Ryuichi Sakamoto, who was awarded Best Soundtrack for period epic “The Fortress,” Han Sa-rang, who introduced herself as a singer and actor, accepted the award on his behalf. Kim Ji-yeon, a representative of the film’s production company Siren Pictures, was going to collect the award, but she soon returned to her seat after Han, who later told media that she has no relation to the Japanese musician, stepped on stage.

Han, a stranger to most, was accused by netizens of breaking into the ceremony. But the Daejong Film Awards’ organizing committee issued a statement late Tuesday saying that it had asked the association of film musicians to select someone to accept the award for Sakamoto and that they chose Han.

The committee said it had tried to contact the “Fortress” production team but nobody answered. For the same reason, the Best Lighting award, which also went to “The Fortress,” was also given to an executive of the Korea Film Lighting Directors Society.

The committee also expressed regret towards Kim, who complained about the situation. Kim told local media that, although the committee knew she was coming, it said nothing of the plan.

Lee Jun-dong, CEO of Pinehouse Film, the studio behind “Burning,” said in his acceptance speech, “There were many complications with this film. The shooting was delayed for a year. But we were able to make it because the actors and the staff waited for it, taking tremendous risks. We appreciate them for doing this,” he added.