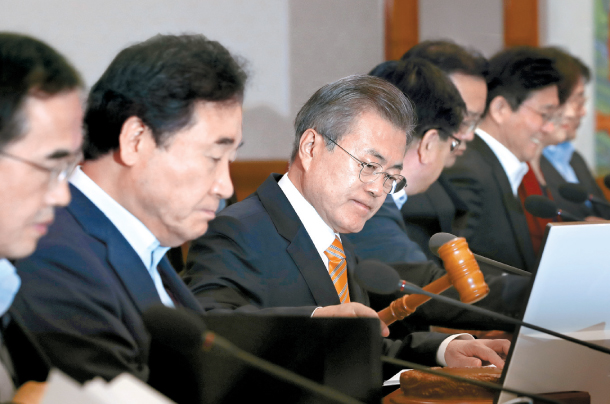 Opposition politicians in the National Assembly groused about being totally bypassed.

Moon also ratified an inter-Korean military agreement signed as an annex to the Sept. 19 agreement that calls for ending military hostilities in all domains - air, land and sea - along the border.

Moon’s ratification of the two agreements came hours after he reviewed and endorsed them during a cabinet meeting earlier in the day, a necessary procedural step for President Moon to ratify them.

The ratifications, however, stoked bitter partisan dispute at the National Assembly with the largest opposition Liberty Korea Party (LKP) calling the move a “blatant act of disregard” of the parliament, which is still reviewing the Panmunjom Declaration, the product of Moon’s first summit meeting with Kim on April 27, for parliamentary approval.

“At our [cabinet] meeting today, we will review the Pyongyang Declaration signed last month and a military agreement on the implementation of the historic Panmunjom Declaration,” Moon said at the beginning of the cabinet meeting.

“Improving inter-Korean relations and easing military tensions will serve as a catalyst for the complete denuclearization of the Korean Peninsula,” he continued.

He noted that improved Seoul-Pyongyang relations will not only protect the lives and security of South Koreans but also be a boon to the local economy.

“More than anything, it will benefit those living along the border areas affected negatively [from inter-Korean tensions],” he said.

The ratification of the Pyongyang Declaration came after the Ministry of Government Legislation determined that it was not subject to parliamentary ratification because the Panmunjom Declaration was already being reviewed by the National Assembly for passage.

It viewed the Pyongyang agreement as a follow-up to the April 27 agreement.

In the Sept. 19 agreement, the two Koreas agreed on a wide range of issues from forming a joint military committee to launching a groundbreaking ceremony for the connection of railways and roads between the two Koreas and ceasing all military hostilities in all domains along the border.

For the inter-Korean military agreement, formally titled “Agreement on the Implementation of the Historic Panmunjom Declaration in the Military Domain,” the authorities also ruled it did not need to be approved by the National Assembly since its implementation would not involve taxpayers’ money.

In the military agreement, the two Koreas consented to set in place a no-fly zone and halt all military drills along the border effective Nov. 1, among other measures, to ease military tensions and avoid accidental military clashes.

The ratified military agreement will be exchanged with one from the North, although a date was not announced.

The judgment from the Ministry of Government Legislation elicited a backlash from opposition parties, particularly the LKP.

They questioned whether it was right for the presidential office to push ahead when the earlier agreement was still being deliberated on.

Under the Development of Inter-Korean Relations Act, an inter-Korean agreement that involves government funding for implementation needs parliamentary approval, as was the case for the Panmunjom Declaration.

The opposition is refusing to ratify the Panmunjom Declaration, saying the government has not provided a full-cost estimate for the railway project.