Death with dignity is catching on

Death with dignity is catching on 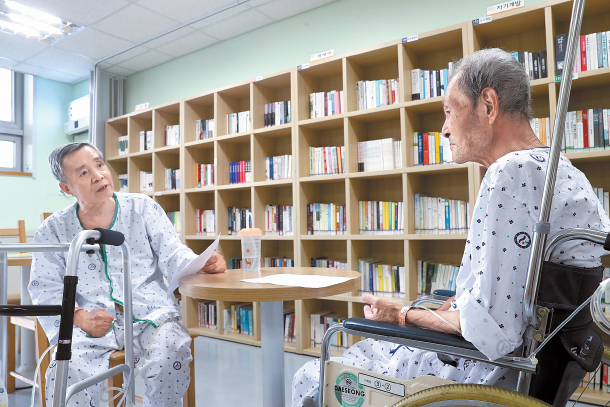 Kim Byeong-guk and Lee Seung-chul, patients with terminal cancer, discuss the benefits of signing do not resuscitate orders at the Seoul Metropolitan Dongbu Hospital, central Seoul on Oct. 5. Lee signed the order after a month of consideration while Kim signed after two days of consideration. [JANG JIN-YOUNG]

In the eight months since the death with dignity law passed the National Assembly, some 20,742 patients have refused medical treatment to prolong their lives. It took 20 years for the law to get enacted and it is changing how society perceives human mortality.

The law largely covers terminal patients choosing to reject medical treatment because the quality of life they can expect will be miserable.

In order to determine a patient’s eligibility under the law, an official written opinion from a doctor and an expert in the disease in question is needed. Eligible patients can then order the ending of medical treatment that could prolong their life like anticancer drugs. However, the law dictates that pain relief measures and basic injections of nutrients, water and oxygen be maintained. 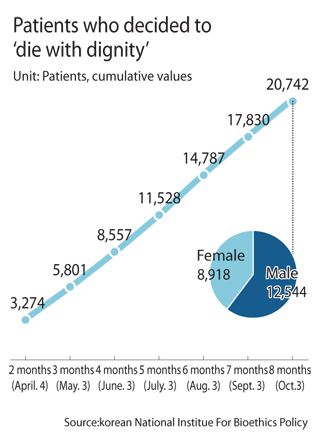 “[The disease] is too painful to endure,” a patient with terminal uterine cancer said in an interview with the JoongAng Ilbo. “Falling ill was not something I had any control over, but I wish to at least choose how I go.”

Kim Byeong-guk, a patient with terminal prostate cancer, has chosen to refuse life prolonging medical treatment. “Instead of obsessing about wanting to live, one should focus on how you live,” said Kim. “I have no chance of surviving. I have accepted this and am focusing on spending the rest of my life in a fulfilling manner.”

The pain that the patient’s family goes through is also a factor to consider. Mr. Hwang, whose wife was diagnosed with terminal breast cancer, told the JoongAng Ilbo how he wished he had applied for her before her final days.

Hwang’s wife died a week after the start of life support treatment. During her lifetime, she was known for being neat and tidy. That’s not how she left the world. According to Hwang, she was hooked up to countless medical devices when she passed away. “The medical crew performed CPR [after she was unconscious],” he recalls. “Afterwards her whole body was bruised from the practice. It was painful for us, her family, to see. I would have wished to send my wife off with more dignity.”

Embracing death goes against the traditional Confucian values that define Korean society. According to Confucianism, life is given by one’s ancestors and is not something that could be dealt with on one’s own terms. However, with the enactment of the death with dignity law, more people are starting to realize that the right to die with dignity is as important as the right to live well.

“Awareness of embracing death on one’s own terms settled deep into our society after the law was enacted” said Dr. Heo Dae-seong, a medicine professor at Seoul National University who specializes in treating brain tumors.

More people are signing up to reject life support when they are close to death or resuscitation. 58,845 perfectly healthy people have gone to hospitals to sign do not resuscitate orders. Out of the 58,845 people, 39,350 were women and 19,495 were men.

The law still has room for improvement. “A patient is required to get their grandchildren to sign off on their decision, which is proof that the application process is too complicated,” said Baek Su-ji, director of the Korea National Institute for Bioethics. “The fact that more relatives are deciding [on denying life support] for their sick relatives instead of the patients themselves needs to change as well.”

According to the National Evidence-based Healthcare Collaborating Agency, 30,000 to 50,000 patients who could have benefitted from the death with dignity law failed to because they weren’t aware of the law.

But the fact that 2,500 people have applied for orders not to be hooked up to respiratory devices is a significant step forward. “These statistics prove the phenomenal perception change our society is going through,” said Ahn Ki-jong, a spokesman for the Korea Alliance of Patients.