Intrepid Eagles get their wings clipped

Intrepid Eagles get their wings clipped 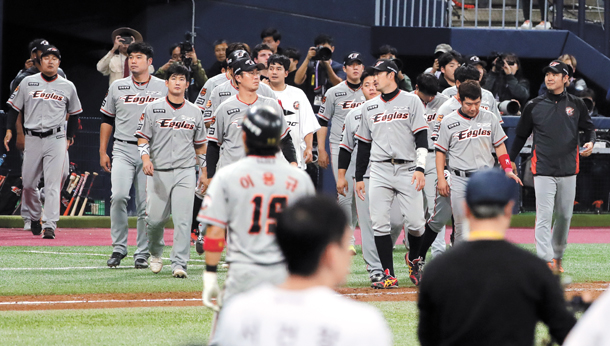 The Hanwha Eagles walk off the field after losing Game 4 of the second round of the postseason 5-2 against the Nexen Heroes at the Gocheok Sky Dome in western Seoul on Tuesday. [ILGAN SPORTS]

After 10 years in the wings, the Hanwha Eagles finally got an opportunity to appear in the KBO postseason again this week. Sadly, a decade of waiting wasn’t enough to help the Eagles to victory, and they quickly crashed with a final series score of 3-1 to the Nexen Heroes.

The final nail in the coffin was a 5-2 loss against the Heroes at the Gocheok Sky Dome in western Seoul on Tuesday, with the Eagles unable to capitalize on their momentum from a victory the day before. The Eagles, who ended the regular season above the Heroes in the final standing, began the series with an advantage - the first two games were played at the team’s home stadium in Daejeon. The team never capitalized on the opportunity, losing the first two games.

Despite a comeback on Monday, taking one game back to bring the series score to 2-1, the Eagles couldn’t live up to expectations. Nineteen-year-old starter Park Ju-hong gave up three runs in three and two thirds of an inning and the batters couldn’t score against the Heroes’ young pitchers. The Eagles had six hits, three more than the Heroes, but couldn’t score.

Just as they did in the second and third game, the Eagles took an early lead with a run in the first inning. Although the Heroes responded with a run at the bottom of the third, the Eagles took back the lead at the top of the fourth by adding another run. The Heroes changed pitcher, bringing An Woo-jin on, and the Eagles scoring run came to an abrupt end.

The Heroes also opted for a young starter - 19-year-old Lee Seung-ho took the mound to open the game by giving up two runs in three and one third of an inning. Once Lee left the mound, An took control and only allowed two hits and no runs to pick up his second win in the postseason. Prior to Tuesday’s game, An also tossed a scoreless three and one third of an inning on Oct. 20 to become the youngest pitcher in the KBO, at 19, to pick up a win in a postseason game.

At the bottom of the fourth, with the Heroes down 1-2, Kim Kyu-min brought home two runners to give the Seoul-based club the lead for the first time in the game. Lim Byeong-wuk sealed the deal in the eighth, adding two more to take the score to 5-2.

The Eagles managed to get on base at the top of the ninth, but three catches quickly brought their postseason campaign to an end.

“As long as we could finish the first round within four games, I felt we could have a shot at winning the next series,” Heroes manager Jan Jung-seok was quoted as saying on Yonhap. “This won’t be the end for us. We have a couple more hurdles to clear.”

After the game on Tuesday, Lim was selected as the MVP for the first round of playoffs. Throughout the four games, Lim scored five runs and eight RBIs with a .364 batting average.

“I think we were able to clinch the series because we all wanted to play for [Lee] Jung-hoo,” Lim was quoted as saying after the game. “He helped us get this far, and the best we can do is keep battling. Perhaps we can create some miracles.”

In the regular season, the Eagles set expectations high for fans by finishing third with 77 wins and 67 losses. The Daejeon-based team missed out on postseason for the last 10 seasons.

Although the Eagles had a brief postseason, the club has made a significant improvement this season. Manager Han Yong-duk strengthened the bullpen, making it the best in the league, but struggled with starters.

“Overall, we didn’t have a proper pitching team so we had a tough season,” Han said after the game. “From the weak starters, I felt that we wouldn’t be strong enough in the short term. Although we’re done today, we’ll prepare for next season better and excite the fans more.”

Thanks to the return of the Eagles, all four playoff games were sold out. The tickets for the first two games at Daejeon Hanbat Baseball Stadium sold out in just a few minutes after tickets went on sale. The third and fourth games at Gocheok Sky Dome also sold out, with the stadium once again filling with Eagles orange.

Starting on Saturday, the Heroes will play start the second series of the playoffs against the SK Wyverns at Munhak Baseball Stadium in Incheon at 2 p.m.