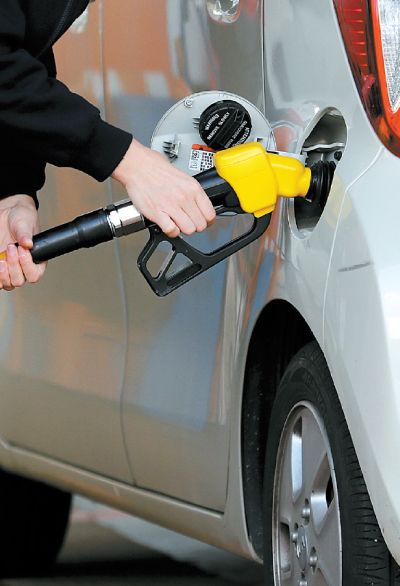 A driver fills up at a gas station in Seoul on Wednesday. [YONHAP]

The government is lowering fuel taxes 15 percent for six months to help people save on monthly spending. It’s also hoping to give a fillip to a weakening economy by increasing households’ disposable income.

According to the Ministry of Strategy and Economy on Wednesday, for six months starting Nov. 6, the gasoline tax will be lowered from the current 746 won per liter ($2.50 per gallon) to 635 won.

It’s the first fuel tax cut in 10 years. In the middle of the global economic meltdown of 2008, the government cut fuel taxes 10 percent for 10 months. At the time, international crude prices surged to $140 per barrel.

The government estimates that if the cut in fuel taxes are applied fully, the gasoline pump price will fall 7.3 percent or 123 won per liter. Based on the national average price of gasoline as of the third week of October, which was 1,686 won, the price would be lowered to 1,563 won per liter. (This figure includes a 10 percent value-added tax.) For diesel, the pump price would be lowered 5.8 percent or 87 won from 1,490 won to 1,403 won and for LPG butane 3.2 percent or 30 won from 934 won to 904 won.

The cuts are expected to cost the government 2 trillion won worth of fuel taxes.

Deputy Finance Minister Ko Hyoung-kwon said the government decided to cut fuel taxes by 15 percent so that the public can really feel the difference and possibly spend more elsewhere to help economic growth, which has been flagging. There was earlier speculation the government might cut the taxes 10 percent.

“As the situation [of low-income households and small and medium-sized enterprises] becomes more difficult with rising international crude prices, we have decided to aim for a psychological effect that would help the economy by increasing disposable incomes,” Ko said. “The government doesn’t like to use policies that were used in the past. [The fuel tax cut] reflects the government’s strong will.”

According to the government 80 percent of the 3.58 million trucks on Korean roads are trucks of one ton or less owned by small business owners.

While the government doesn’t believe that international crude prices will spike as they did in 2008 - in just four months, they rose 35 percent - they are climbing, which puts a growing burden on low-income households and small businesses, which won’t help the domestic economy.

According to the government, the average national gasoline retail price has risen 8.7 percent from the beginning of the year when it was 1,551 won per liter. Dubai crude, which Korea relies on the most, has risen 17.6 percent from January to $77.88 per barrel as of Oct. 19.

The government said it wished the fuel tax cuts could have been designed to specifically give more benefits to lower-income families.

“The best solution would have been a tax refund accordingly to the person’s income, but creating such a system would have taken us at least six months,” Ko said.