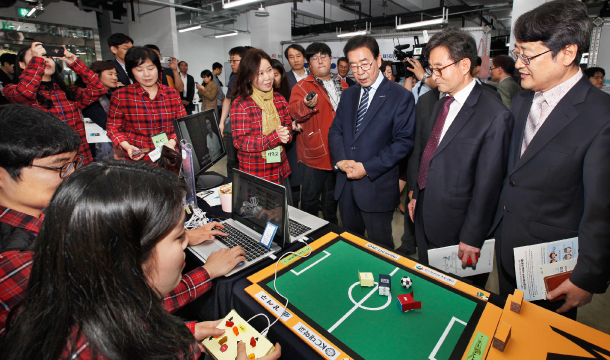 Seoul Mayor Park Won-soon, third from right, Lee Gil-hyung, president of KC University, second from right, and other staff members of universities in Seoul observe a model of a product that uses coding as part of KC University’s education work with its local community, at a festival of start-up businesses and community projects at Seoul Startup Hub in western Seoul on Wednesday. [PARK SANG-MOON]

Heads of some 50 universities in Seoul gathered at the Seoul Startup Hub in western Seoul on Wednesday to celebrate the establishment of nearly 200 start-ups in the city involving 547 entrepreneurs as a result of cooperation among university students, professors and local residents.

“A total of 197 start-up businesses were born in the past three years through the Campus Town project, with about 19,000 people participating,” Seoul Mayor Park Won-soon said in a meeting with the heads of Seoul-based universities. “The Seoul city government will continue to support young people in their efforts in the start-up field by working with the universities.”

Campus Town is a Seoul city government project involving 48 universities in Seoul and local residents in the area to cooperate on start-up businesses and other local projects to promote community-driven economic activities. The project was launched by the city government in 2016 with a plan to spend 152 billion won ($134.6 million) through 2025 to provide funding and support for both hardware and software needs of startups.

In the past three years, 14 universities have come up with tangible contributions. Korea University built a start-up center near its campus in central Seoul to provide space for free to start-up companies. Students and professors from Dongyang Mirae University in Guro District, western Seoul, designed brands and products for 23 stores in the area. KC University, a Christian school founded in 1958 in Gangseo District, western Seoul, focused on offering university programs to the undereducated population in the area.

“One of our programs funded by the Seoul city government is a coding course offered by professors and students at the university, who visit the home of a local resident and teach him or her coding using their laptops,” said Kang Woo-jun, director of the R&D Foundation and professor of business administration at KC University. “Professors and students at the university also came up with various innovative courses and offered them to middle schools in the area - this year we came up with some curriculum for acting classes for middle school students.”

There are eight other similar programs involving educating the youth in the area run by the KC University and the Seoul city government, in cooperation with the Gangseo District Office.

“I look forward to expanding and adding depth to the programs to support local education,” said Lee Gil-hyung, recently appointed president of KC University. “With continued support and cooperation from the local district office and the Seoul city government, I am sure we will continue to make great progress.”

Some of the start-up businesses showcased their products at the festival throughout the day at Seoul Startup Hub for meet-and-greet opportunities with investors and other entrepreneurs.

“By next year, 32 universities in Seoul will be participating in the project,” said Kwon Ki-wook, head of the urban planning bureau of the Seoul city government. “The goal is to have 60 Campus Towns, or areas where universities cooperate on projects with local residents, by 2025. For this, the city government will be working on loosening height regulations on buildings where necessary and working with local district offices on possible tax exemptions and electricity bill subsidies for start-up businesses involved in the project.”

Mayor Park added that in order to attract more international entrepreneurs to Seoul to promote start-ups, he will be working with the Ministry of Justice on visas for foreigners.

“The Seoul city government is working with the Ministry of Justice on a measure that will simplify the visa process for incoming foreign entrepreneurs with feasible business plans,” Park said. “We are also working to provide public rental housing to such foreign entrepreneurs in Seoul. Seoul could become more than what Silicon Valley is today.”