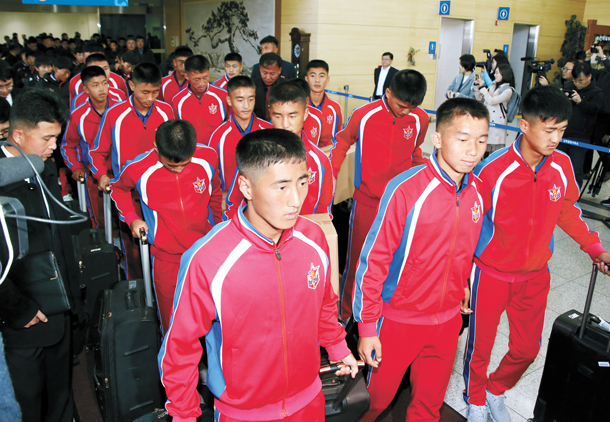 The ministry said the 84-member North Korean delegation crossed the Military Demarcation Line (MDL) and came to South Korea via the Gyeongui Line just after noon. They were greeted by South Korean officials, including Gangwon Governor Choi Moon-soon, at the customs, immigration and quarantine (CIQ) office at Dorasan Station in Paju, north of Seoul.

The North’s delegation is led by Mun Ung, a vice-minister-level official who heads the April 25 Athletic Committee.

“As I step on this ground for the first time in 60 years, I felt this is also my country, and you know we’re one people,” Mun told reporters about his visit to South Korea.

North Korea has sent three teams to the 5th Ari Sports Cup youth football tournament, which will be held in Chuncheon and Inje in Gangwon next week. The North Koreans will return home on Nov. 3 via China.

The tournament, organized by the South-North Inter-Korean Sports Association, will have eight teams from six countries, including China and Vietnam.

The fourth edition of the tournament was held in Pyongyang in August, and 150 South Koreans visited the North Korean capital to participate.

“We hope this football tournament can make progress and play a bigger role in the development of inter-Korean relations,” Gangwon Governor Choi said. “More than 25,000 residents in Gangwon said they would watch the matches. In achieving this tournament, I hope we can have an opportunity that will expand exchanges between young students from the two sides.”