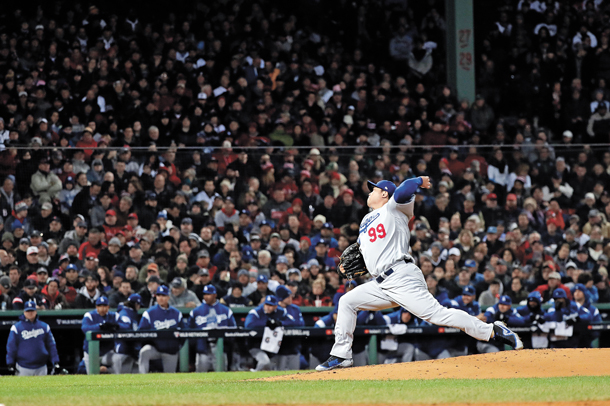 Ryu Hyun-jin of the Los Angeles Dodgers throws a pitch during Game 2 of the World Series against the Boston Red Sox at Fenway Park in Boston on Wednesday. [AP/YONHAP]

Ryu Hyun-jin of the Los Angeles Dodgers became the first Korean starter to appear in the World Series on Wednesday, when he started in Game 2 against the Boston Red Sox. 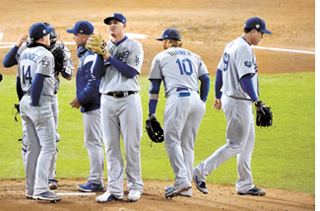 Ryu Hyun-jin, right, leaves the mound in the fifth inning during Game 2 of the World Series against the Boston Red Sox on Wednesday. [AP/YONHAP]

Nearly three and a half hours later, Ryu also became the first Korean starter to lose in the World Series, as the Red Sox won the game 4-2 to take an overall series lead of two games to zero.

On a chilly day in Boston, Ryu got off to a great start with three quick outs in the first inning. Although he gave up a run in the second to allow the Red Sox to take the lead, the Dodgers bounced back by scoring two runs at the bottom of the fourth. Right when it seemed as if Ryu could take a win, things started to go wrong in the fifth.

Two quick outs in the fifth suggested that Ryu had really found his stride, but that third out proved elusive. He gave up hits to the next two batters - Christian Vazques and Mookie Betts - and both players got on base. A terribly timed walk loaded the bases, and Dodgers manager Dave Roberts made the call to pull Ryu for reliever Ryan Madson.

Madson wasn’t able to turn the inning around, and all three Red Sox players made it home to take the lead 4-2. The Dodgers were unable to score for the rest of the game and the LA team had no choice but to take a second World Series loss.

“Obviously, I was ahead in the count and there was a moment where I could have ended that inning,” Ryu was quoted as saying on the MLB website. “If I could have commanded my pitches better, I think there would have been a different result, but that’s only hindsight.”

By giving up four runs and six hits in four and two thirds of an inning with 7.71 ERA, Ryu picked up a loss.

Although Ryu wasn’t able to pick up a win, he made Korean baseball history by becoming the first Korean starter to appear in the World Series. Kim Byung-hyun of the Arizona Diamondbacks and Park Chan-ho of the Philadelphia Phillies made appearances in the World Series, in 2001 and in 2009 respectively, but both appeared in the bullpen.

“The real problem was giving up that walk after that base hit, so I think that led to me getting substituted or getting taken out of the game,” Ryu said. “My pitch count was low and I wasn’t really tired.”

This season, Ryu had to miss more than three months with a groin injury, but he returned with a bang and finished the season with seven wins and three losses with a 1.97 ERA, good enough to get added to the postseason starting rotation.

But in both the regular and postseason games this year, Ryu’s performance has varied greatly on the road and at home. In the regular season, Ryu picked up five wins and two losses with a 1.15 ERA at home games, but just two wins and one loss with a 3.58 ERA in away games.

The trend continued in the postseason, where he picked up one win at home and two losses in both of the away games. Ryu had one no-decision game against the Milwaukee Brewers on Oct. 13. In the four postseason games Ryu has started in, he has a 5.21 ERA.

After a dominant KBO career, Ryu signed a six-year $36 million contract with the Dodgers for the 2013 season. In his rookie season, Ryu brought in 14 wins with the Dodgers and became the first Korean to be the starting pitcher in an MLB postseason game. Although Ryu struggled with injuries in 2014, he had another successful season with 14 wins and seven losses with a 3.38 ERA in 26 games.

Things took a turn for the worse in 2015 when Ryu struggled to recover from surgery on his left shoulder, something that can often end a baseball player’s career. Since there weren’t many pitchers making successful returns after shoulder surgeries, many doubted that Ryu would ever pitch again. After struggling with an injury for two seasons, Ryu slowly made a comeback in 2017 by picking up five wins and nine losses with a 3.77 ERA. This season, he returned with full force.

While Ryu struggled, Red Sox starter David Price gave up three hits and two runs while striking out five in six innings to pick up a win. Price is one of the Red Sox top starters, having won the American League Cy Young Award in 2012 while playing for the Tampa Bay Rays and been selected as an All-Star five times throughout his career.

The Dodgers will play the next two games of the World Series - Game 3 and 4 - against the Red Sox at Dodger Stadium, starting on Friday at 8:09 p.m. local time, or 9:09 a.m. on Saturday morning in Korea.