‘If you want peace, prepare for war,’ says Kim Tae-young

‘If you want peace, prepare for war,’ says Kim Tae-young 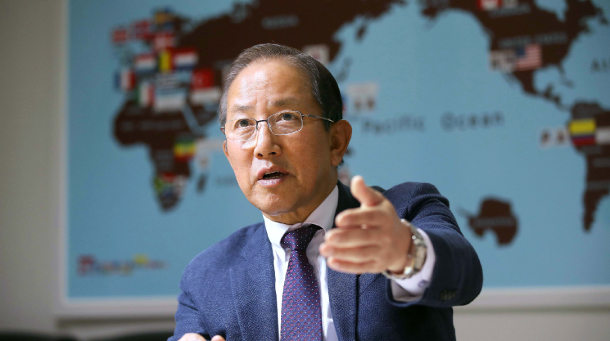 South Korean President Moon Jae-in signed a military agreement as an addition to the Pyongyang Declaration, announced on Sept. 19 based on his summit with North Korean leader Kim Jong-un. The agreement calls for ending military hostilities in all domains — air, land and sea — along the inter-Korean border.

The decision, however, hasn’t received unanimous support. Some said that it may have been too hasty and ignorant of Korea’s diplomatic relationships with other countries, mainly the United States. U.S. Secretary of State Mike Pompeo expressed “discontent” over the agreement.

Q. It is said that the United States expressed strong discontent towards connecting South and North Korea via a railroad.

The government says the agreement was to relieve military tension.

Recovering confidence in the relationship should come first, followed by operational arms control and then practical reduction of arms. In 1975, the North Atlantic Treaty Organization and the World Trade Organization pushed for operational arms control through agreements like the Helsinki Accords, but this wasn’t realized for more than 20 years. Open skies between Germany and France, where each country’s aircraft could go on reconnaissance flights to each other’s skies, went into effect only in 1992. But we didn’t make preliminary steps and jumped into operational arms control. In case of Germany, the West didn’t disarm its 495,000-strong military until the two sides were united. It is hard to understand why everything is in hurry when North Korea is armed with nuclear weapons.

What about the security of the five West Sea Islands?

It is like we have given up the coast of Incheon. We built the Northwest Islands Defense Command after the North bombarded Yeonpyeong Island, one of the main islands off the coast of Incheon, so South Korea’s Air Force and Navy could support the Marines. Now, the Air Force is not allowed there. The two Koreas also agreed to a no-fly zone over the demilitarized zone (DMZ). South Korea’s capital, Seoul, is only 40 to 50 kilometers (25 to 31 miles), from the DMZ while Pyongyang is 150 kilometers away. We agreed not to do military drills in the forward area, but there is no room for drills in the back. South Korea also said it will talk to the North when it strengthens its future military force. That has gone way too far.

Perhaps the sincerity shown towards North Korea could lead to a virtuous cycle.

The dominating premise here is that since North Koreans are the same people as us, everything will be okay. If that is the case, how should we perceive the decades of history behind us? It is essential to be prepared with back-up plans, since we cannot trust them fully. That is fundamental to our security. We have to think about what they’ve done in the past, not giving up on their nuclear weapons program. Aside from North Korea, we already have a critical threat: China. Is it right to disarm the military so soon? There is an old saying — “If you want peace, prepare for war.”

What are possible backup plans?

Dealing with North Korea’s nuclear weapons and missiles would have to come first. We should not naively trust their words that “we won’t use it anymore.” There is bigger possibility that North Korea hasn’t fully denuclearized. We should have three systems, including the Korea Air and Missile Defense (KAMD), the Kill Chain pre-emptive strike system and the Korea Massive Punishment and Retaliation (KMPR) plan, in order to pre-emptively destroy North Korea’s nuclear weapon and missile threats.

Discussing reconciliation rather than security with North Korea may shake up the military’s identity.

The responsibility of the South’s armed forces is protecting the territory while securing state sovereignty. It is also responsible for protecting the life and property of South Koreans and maintaining global peace. Unless the real threats get eliminated, the North is clearly our foe. Germany didn’t go through a civil war, which is perhaps why they pointed at Russia as the real enemy. Nonetheless, the South shouldn’t be ignorant of the threat coming from China.

South and North Korea are together pushing for the end of war.

North Korea’s ultimate goal is to make the United States withdraw its military from South Korea. Piece by piece, North Korea will try to push out the U.S. army, and along the way, China and Russia will help. The United States will not leave South Korea easily as it has to check on China. But what’s critical is the South Korean government’s stance. Until last year, officials from the U.S. government questioned President Moon’s intent. Now they don’t. It seems they figured out the answers by themselves.

The UNC was established by the UN Security Council to counter North Korea’s armed attacks and provide help to restore peace in the area. Even if it is a political statement, if North Korea announces the end of the war with South Korea, the purpose of the UNC loses its force. China and Russia will pressure the United States to eliminate the UNC and the U.S. military in South Korea.

What is your biggest concern?

The ambivalent attitude of our government toward the South Korea-U.S. alliance. The president says the alliance is important, but the cabinet acts the other way. If the government continues to downsize the military when the situation hasn’t gotten better, the military will question why they have to be there.