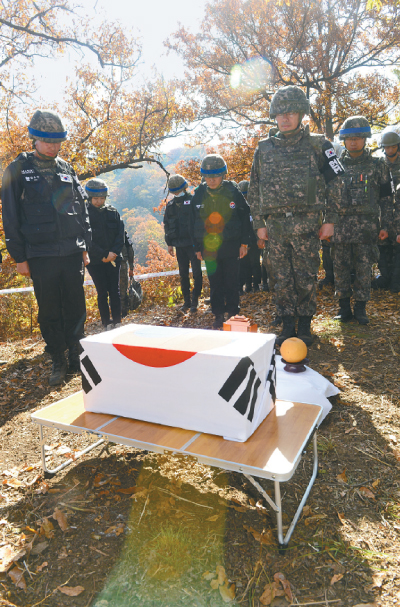 Army soldiers pay tribute to the remains of a soldier who died in the Korean War on Arrowhead Ridge in Cheorwon County, Gangwon, Thursday. [YONHAP]

Remains of two soldiers who died in the 1950-53 Korean War were recovered from the demilitarized zone (DMZ), the South Korean Ministry of National Defense announced Thursday, along with personal belongings of others.

Two sets of remains including thigh and rib bones were recovered Wednesday by the Defense Ministry’s Agency for KIA (Killed in Action) Recovery and Identification, the first to be found on Arrowhead Ridge, also known as Hill 281, in Cheorwon County, Gangwon, a site of key battles during the war.

Since the beginning of this month, the two Koreas have been removing land mines and explosives along the border to enable a joint excavation project to retrieve remains of soldiers who died during the war. This is in line with an inter-Korean military agreement signed on Sept. 19 by their defense ministers during a three-day summit between South Korean President Moon Jae-in and North Korean leader Kim Jong-un.

“Along with the presumed two remains, we found identification tags and other articles [belonging to fallen soldiers],” said Choi Hyun-soo, the Defense Ministry spokesperson, in a briefing Thursday. “We plan to confirm the identity of the remains through DNA analysis.”

One of the items recovered was a dog tag retrieved from near the remains that reads: “8810594 PAK JE KWON.” According to the ministry’s records, Pak Je-kwon was a sergeant in the Republic of Korea’s 2nd Army Division who joined the military in March 1951 and was killed in action at the age of 21 on July 10, 1953, during a battle at Arrowhead Ridge.

The KIA Agency plans to take DNA samples from Pak’s two surviving younger sisters and run tests to determine if either of the recovered remains belonged to him.

As of Wednesday, officials have retrieved a total of 1,252 items from the ridge, including 14 land mines, 187 explosives and M1 rifles.

The ministry estimates over 300 soldiers are buried there, including some 200 South Koreans, American and French troops from the United Nations Command as well as North Korean and Chinese soldiers.

The land mine removal operation is considered the first step toward the implementation of an inter-Korean military pact converting the DMZ into a peace zone in keeping with the inter-Korean Panmunjom Declaration of April 27.

“Sgt. Pak Je-kwon has returned to us, 65 years after he passed,” President Moon posted on his Facebook account on Thursday. “There should never be anyone killed in war on this land again, nor should it take 65 years to recover the remains.”

The Defense Ministry estimates there are some 10,000 sets of remains of South Korean soldiers in the DMZ area, highlighting the need for the joint excavation project set to take place next year from April 1 to Oct. 31.