Could SK be the team to finally stop Nexen?

Could SK be the team to finally stop Nexen? 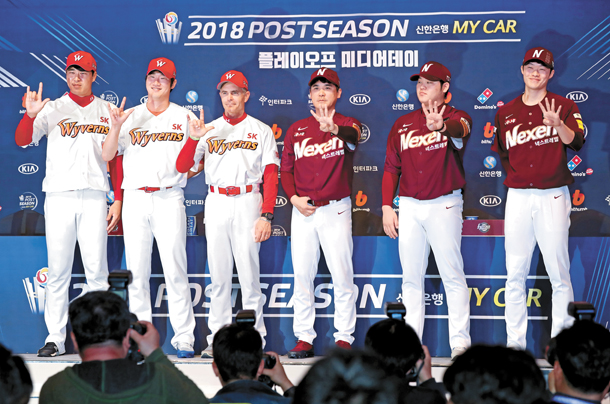 The Nexen Heroes will look to continue their postseason run as they take on the SK Wyverns in the second round of the KBO playoffs in Incheon today. 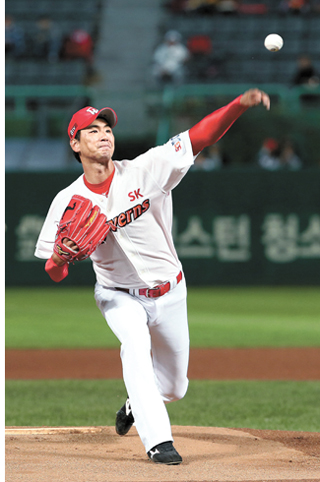 Kim Kwang-hyun of the SK Wyverns throws a pitch during a game against the Kia Tigers at Munhak Baseball Stadium in Incheon on Oct. 4. [NEWS1]

The Heroes, who finished fourth in the regular season, have already beaten the Kia Tigers in the wildcard series and the Hanwha Eagles in the first round of the postseason to earn their spot in today’s game. The Seoul-based club will be hoping to continue their momentum and topple the Wyverns to reach the Korean Series in an improbable postseason Cinderella story.

The Wyverns have very different ideas. This is the first time since 2012 that the Incheon club has appeared in the playoffs. The team, who joined the KBO in 2000, have won three Korean Series titles, in 2007, 2008 and 2010. Last season, the Wyverns lost the wildcard game to the NC Dinos, the closest they have come to the postseason proper in six years - in the KBO, the wildcard game does not officially count as part of the playoffs.

This year, manager Trey Hillman has assigned Kim Kwang-hyun as their starter in the hope of bringing back the club’s past glory.

“With the experience that he has, we felt that was our best option for Game 1,” Hillman said at a press conference. “It’s going to be an exciting game and an exciting series. Hopefully, he can put the ball in the non-dangerous areas in the strike zone and be successful.”

This is the first time in three years that Kim has pitched in any postseason game - in 2015, he played in the wildcard series. Although the Wyverns played in the wildcard last season, Kim wasn’t able to play as he was recovering from elbow surgery. Since Kim had to miss the entire 2017 season, he said his return to the postseason makes him feel like a rookie. Kim played in 25 games this season and picked up 11 wins and eight losses with a 2.98 ERA without injuries.

“We have some power, and they have some power,” Hillman said. “They also have speed, and I look at Nexen as having a very athletic team. The main thing is going to be pitch execution.” 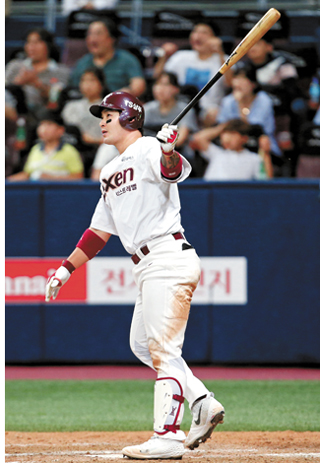 Park Byung-ho of the Nexen Heroes watches his home run during a game against the Doosan Bears at Gocheok Sky Dome in western Seoul on Sept. 18. [YONHAP]

In addition to Kim, the Wyverns are hoping for a streak of home runs in the postseason. The Wyverns were the leaders in home runs, at 233, and two of their batters - Jamie Romak and Han Dong-min - managed to hit more than 40 home runs this season. Han’s home runs were more threatening against the Heroes as 11 were hit against the Heroes.

As the Wyverns have a team of veterans, they are determined to make this year the best one yet, before manager Hillman leaves.

“When I first heard that Hillman will not return, I felt pretty sad,” Han said. “I don’t know if I’ll meet another manager like him. We all want to be with him longer, so the only way to do it is to advance all the way to the Korean Series and win the Championship.”

Although the Heroes have a much younger team, manager Jang Jung-suk isn’t too concerned. As the Heroes finished fourth in the regular season, they played the most games among the postseason teams, but Jang thinks that the players have probably recovered already as they are still young.

“They guys may be a bit exhausted but they’re young enough that they can recover quickly,” Jang said. “Half of our relief pitchers didn’t even get into the games. I expect someone to step up from the bullpen in the series.”

Against the Wyverns, the Heroes will start Jake Brigham.

“Without a doubt, Brigham is the ace of our staff,” Jang said. “We’re counting on him to pitch like he did in Game 1.”

The Heroes, established in 2008, have advanced to the Korean Series only once in 2014. The club lost to the Samsung Lions to fall just short of the championship title. Over the years, the Heroes have been focusing heavily on developing young players - this season, the club is the youngest team in the KBO, averaging 25.5 years old. Due to this, only a few players on the team have experienced the Korean Series, most notably Park Byung-ho and Seo Geon-chang.

Despite the concern of having one too many young players, the Heroes have shown a lot of potential already in the postseason.

In the batting lineup, Lim Byeong-wuk proved crucial in the first round of the playoffs. In four games, Lim hit two home runs and eight RBIs with a .364 batting average, good enough to win the MVP award. Second baseman Song Sung-mun added more depth in offense with a .538 batting average.

“All our players are young so it’s hard to expect how we’re going to play,” Lim said. “So I believe there’ll be another player, just like the first round of the playoffs. Before I get a chance, I think other players will get it done.”

On the mound, An Woo-jin had been the surprise star. An has appeared in two postseason games against the Hanwha Eagles - on Oct. 20 and on 23 - as a reliever and picked up wins in both of them by tossing a scoreless three and one-third innings and five and two-thirds of an inning. After his first win, An became the youngest pitcher in the KBO at 19 to pick up a win in a postseason game.

The second round of the playoffs will be played in a best-of-five format, and the first two games will be played at Munhak Stadium in Incheon. The first game will start at 2 p.m. today.